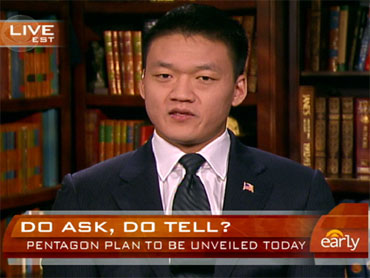 (CBS)
Lt. Dan Choi, who was discharged from the military for revealing he is gay under the "Don't Ask, Don't Tell" policy, is back in uniform.

According to The Bilerico Project, Choi was supposed to lead a workshop on ending "Don't Ask, Don't Tell" Friday but sent his regrets because he had been called up to train with his National Guard unit.

"Apparently, Lt. Choi's commander has always been in full support of him, and even after Lt. Choi came out on The Rachel Maddow Show, his commander did not press for his discharge," writes Jeff Sheng, who posted pictures of Choi in training. "The military did eventually serve Lt. Choi a discharge notification - essentially firing him from his job, but he was allowed to fight this at trial, and as it currently stands, the discharge has not been finalized."

"Given the current state of how DADT is in such flux, and also, in my opinion, the prominence and celebrity of Lt. Choi, his discharge might never be fully enforced," adds Sheng.

Here's an Early Show interview with Choi from last week: