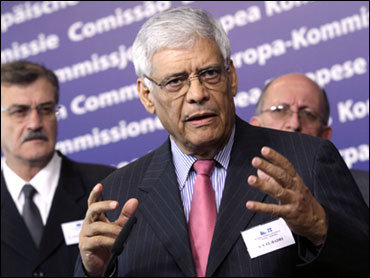 OPEC called Monday on the United States to reconsider a ban on new deep-water drilling that could hold back oil supplies - despite safety concerns in the wake of the massive Gulf of Mexico oil spill.

Abdalla Salem El Badri, secretary-general of the 12-member Organization of the Petroleum Exporting Countries, says offshore drilling is an important source of oil and any ban would be too hasty when the cause of the Gulf of Mexico spill is still unclear.

"We should not really ban it and we should not jump to conclusions," he told reporters after meeting European Union officials in Brussels.

President Barack Obama last month imposed a six-month ban on Gulf of Mexico drilling after an April 20 explosion at a BP oil rig killed 11 workers and blew out a well 5,000 feet (1,525 meters) underwater - spewing out hundreds of millions of gallons (liters) of oil.

A federal judge last week overturned the ban as rash and heavy-handed. The White House has appealed, saying continued drilling exposes workers and the environment "to a danger that the president does not believe we can afford."

The spill and the failure of efforts to stop the oil flow have alarmed other nations. The European Union says it will look at its drilling safety rules for the North Sea and make changes if necessary.

El-Badri said oil producers will examine their rules and drilling practices and "if there is any adjustment that has to be made to the present operation we should take that but we should really be very careful."

"I'm sure that the U.S. government is in limbo because they don't know what's going on in their operation and that's why they stopped their operation in the offshore," he said. "We hope it will not take long and we hope they will relook at their decision."

Some 25 million barrels of oil extracted every year comes from offshore wells - with only 9 million of them from OPEC countries, he said.

He refused to criticize BP, saying "we cannot say BP has a bad reputation because we don't know what happened in the Gulf of Mexico."

Iranian oil minister Masoud Mirkazemi told reporters at the same press conference that Iran was "ready to help" the U.S. with its own technical knowledge of capping blowouts. The U.S. is threatening to increase sanctions against Iran to deter it from developing nuclear weapons - a charge Tehran denies.