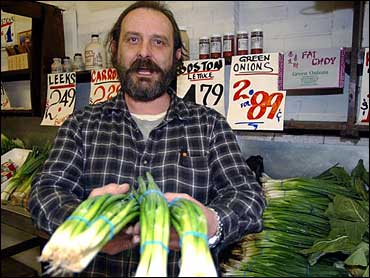 Although it hasn't been proved that Mexico was to blame for the outbreak, U.S. distributors are slashing orders and green onion producers in Mexico say the slump in sales could have a "catastrophic" effect on the industry.

"We don't have the most sophisticated equipment in the world," green onion producer Salvador Navarro said. "But we take a lot of care with hygiene."

Navarro's business, called Agricola Nueva Era, hasn't been tied to a batch of green onions that allegedly came from Mexico and caused a hepatitis outbreak that has killed four people and sickened hundreds more in Pennsylvania, Georgia, Tennessee and North Carolina.

But one of Navarro's clients has already slashed orders by half, and another lowered his imports by 20 percent. To save money, Navarro is giving many of his 700 employees unpaid days off Wednesday and Thursday.

"Publicity is something that has a huge impact on the American consumer," he said.

"I think that will help in large measure to generate confidence that if something has made it to the marketplace, it's the direct result of having met with hygiene standards, both in the field and at the packing plant," Trujillo said.

But the Baja California delegation of the Agriculture Department reported in a written release Tuesday night that no businesses were closed and that four producers must have all their exports inspected and tested for infection before the produce can leave the country. Officials were not immediately available to explain the discrepancy.

The U.S. Food and Drug Administration first linked the four companies under scrutiny near the U.S. border in northwestern Mexico to the hepatitis outbreak.

An FDA team will travel to Mexico on Sunday and together with Mexican authorities will start an investigation to determine how the contamination occurred, FDA official John Guzewich said.

The Mexican government's fast action to scrutinize the companies implicated by the FDA persuaded the United States to keep the border open for the country's 22 other green-onion producers that are in good standing, Trujillo said.

Green onions are big business here and in the neighboring Mexicali Valley, where they make up 90 percent of the fruit and vegetables produced. Most of the scallions are exported to the United States, Canada and Europe.