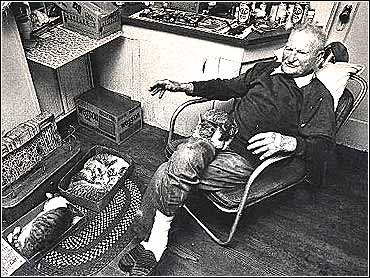 One of the colorful characters people are remembering on the 20-year anniversary of the tremendous eruption of Mount St. Helens is Harry R. Truman.

He refused to leave the Spirit Lake mountain lodge he had operated with his late wife for more than 40 years. But his niece said he didn't expect to die there, reports CBS News Correspondent Stephan Kaufman.

Shirley Rosen of Bothell, Wash., said her uncle always believed he would have time to escape because no one expected the volcano to explode laterally.

"He thought they would come and pluck him off," said Rosen, referring to several news media helicopters that would land and park in the large lot just in front of Truman's resort. "He thought (the volcano) would just go straight up and that somebody would be able to come and get him."

Rosen, who worked as a teen-ager at the lodge and wrote about her uncle in her book, Truman of Saint Helens: The Man and the Mountain, said her sister even tried to coax their uncle to evacuate the resort by using an enticement of bourbon. But it didn't work.

"She brought him a bottle of Schenley's and he put it in the cupboard and said he didn't dare take a drink because he couldn't tell if the earthquakes were shaking or if it was him," Rosen said.

The man who survived the torpedoing of a troopship off Ireland in World War I, now lies buried in his home with his favorite cats beneath hundreds of feet of mud, ash and rocks.

"He used to say that's my mountain and my lake and he would say those are my arms and my legs," Rosen said. "If he would have seen it the way it is now, I don't think he would have survived."

© 2000 CBS News. All Rights Reserved. This material may not be published, broadcast, rewritten, or redistributed