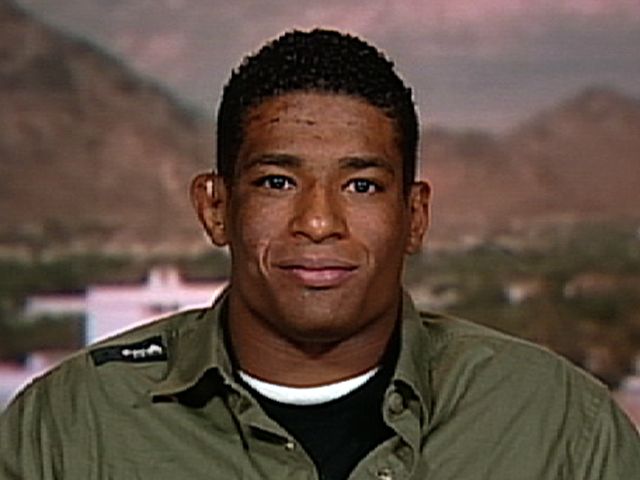 Anthony Robles, of Mesa, Ariz., is celebrating a remarkable achievement. The wrestler, born with no right leg, just won a national championship. It happened at the NCAA finals on Saturday, where he finished a perfect 36-0 season, winning the 125-pound weight class in his final match.

"I was terrified," Robles said. "I had dreamed about being in that situation for the whole year, and just being there and the atmosphere, there was nothing I could do beforehand to prepare me for that. It was so exciting. The fans were into it, my family was there, just a great atmosphere to be a part of. I remember, they were counting down, they were saying 20 seconds before I had to run out on the mat, my stomach started grumbling and I almost threw up before I went out on the mat. But it was definitely exciting, and once I actually stepped out there, it seemed like it was like just any other match. I just kind of switched into auto mode."

Hill pointed out, "There's a lot of talk about your upper-body strength and how important this is for you. Has there ever been a time that when you get out there you think in some ways having only one leg could be an advantage because opponents aren't quite sure how to approach you?"

Robles answered, "I think it evens itself out. On one hand, I do have upper-body strength, which is an advantage, but on the other hand, I am missing my leg, and there are certain wrestling moves and certain things that I can't do out on the mat. It's really just a trial-and-error thing with me. I've had some great coaches in my wrestling career who have worked with me to develop a style that's effective that I can utilize and just focus on my strengths."

"Effective may be an understatement," Hill said.

"After Saturday's match, you said that would be your very last one," Hill said. "Yet I know prior to that, you had talked about a dream you had of going to the Olympics. Have you decided to forgo that dream?"

"Actually, I have," Robles said. "I've been thinking about it for the past year now. And really, I felt like after the national tournament, I could walk away from wrestling satisfied with how I've done -- last in the city to finishing as a national champion. I can walk away happen with that and be content. The Olympics is a different type of wrestling. In college, we do collegiate, and then at the Olympic level, they do freestyle."

Robles says he would like to become a motivational speaker.