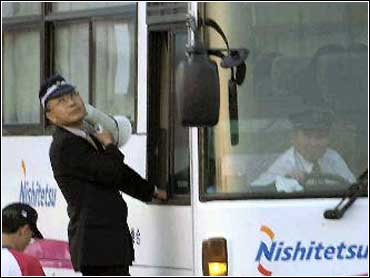 A man armed with a knife hijacked a bus carrying about 20 people Wednesday in southwestern Japan and stabbed three women passengers, one of them fatally. Two other hostages escaped by jumping out of the moving vehicle.

Police cars chased the 40-seat bus down Sanyo Expressway in Yamaguchi Prefecture as the hijacker held the knife against the driver's body, according to national and local police.

About five hours after the ordeal, the bus stopped near a tunnel on the highway, and the hijacker released four male passengers, one of them injured, police said.

Police vehicles then blocked the highway in Hiroshima city and forced the bus to drive down a ramp into a nearby parking area, where authorities began negotiations with the unidentified hijacker.

Police with a megaphone talked with the hijacker through an open window. During the negotiations, they persuaded him to free three women, all of whom had been stabbed in the neck, and another passenger escaped.

Police said one of the injured women was taken to Hiroshima University Hospital where she was pronounced dead. The Kyodo News Service gave her age as 68, but other details were unknown.

About eight people remained aboard the bus with the hijacker, police said. Passengers who were freed said the hijacker's knife was about 16 inches long.

Authorities said they had no idea what might have motivated the hijacker, whom they described as a young man. At one point, before the bus stopped, police said they talked with the kidnapper on his cell phone but did not release details on their conversation.

Police said they first found out about the hijacking when a female passenger was let off the bus at a toll booth near the city of Moji to go to the bathroom and she escaped and called authorities.

Afterward, another woman passenger jumped out a window of the bus as it was moving, said Yamaguchi Prefecture police spokesman Junichi Takezaki. The passenger was injured and taken to a nearby hospital, where she told police she saw the hijacker stab and seriously wound at least two passengers before she fled the bus.

Following her escape, a male passenger, Masayuki Kisikawa, also leaped off the moving bus and escaped with light injuries.

Kisikawa later told police the kidnapper suddenly stood up, drew his knife and began yelling. Kiskawa escaped through a window after the captor ordered him to sit at the back of the bus.

"When I saw police around the bus, I got up my courage and jumped when it slowed down," police quoted him as saying.

For hours, television stations in Japan showed the white bus, its windows covered by curtains, driving down the highway followed by police cars, and TV and police helicopters.

TV cameras also remained on the bus in the parking lot for live coverage of the negotiations.

Kenichiro Noda, a spokesman for Nishi-Nippon Railroad Co., which owns the bus, said the company was unablto contact the driver on its wireless radio after the hijacking occurred. The company's bus department owns and operates 3,000 buses.

"I'm praying for the safety of the passengers," Yuji Kubo, a Nishi-Nippon official, told reporters.

The hijacking occurred about 1 p.m. on Sanyo Expressway near the town of Dazaifu in neighboring Fukuoka prefecture, Takezaki said.

The vehicle was hijacked while traveling from Saga city on Japan's southernmost main island of Kyushu to Fukuoka city.

The attack occurred during Golden Week, a series of several major holidays that many Japanese use to travel.

However, Nishi-Nippon officials said the bus was only going 40 miles to Fukuoka, where many people shop at stores that remain open during the holiday.