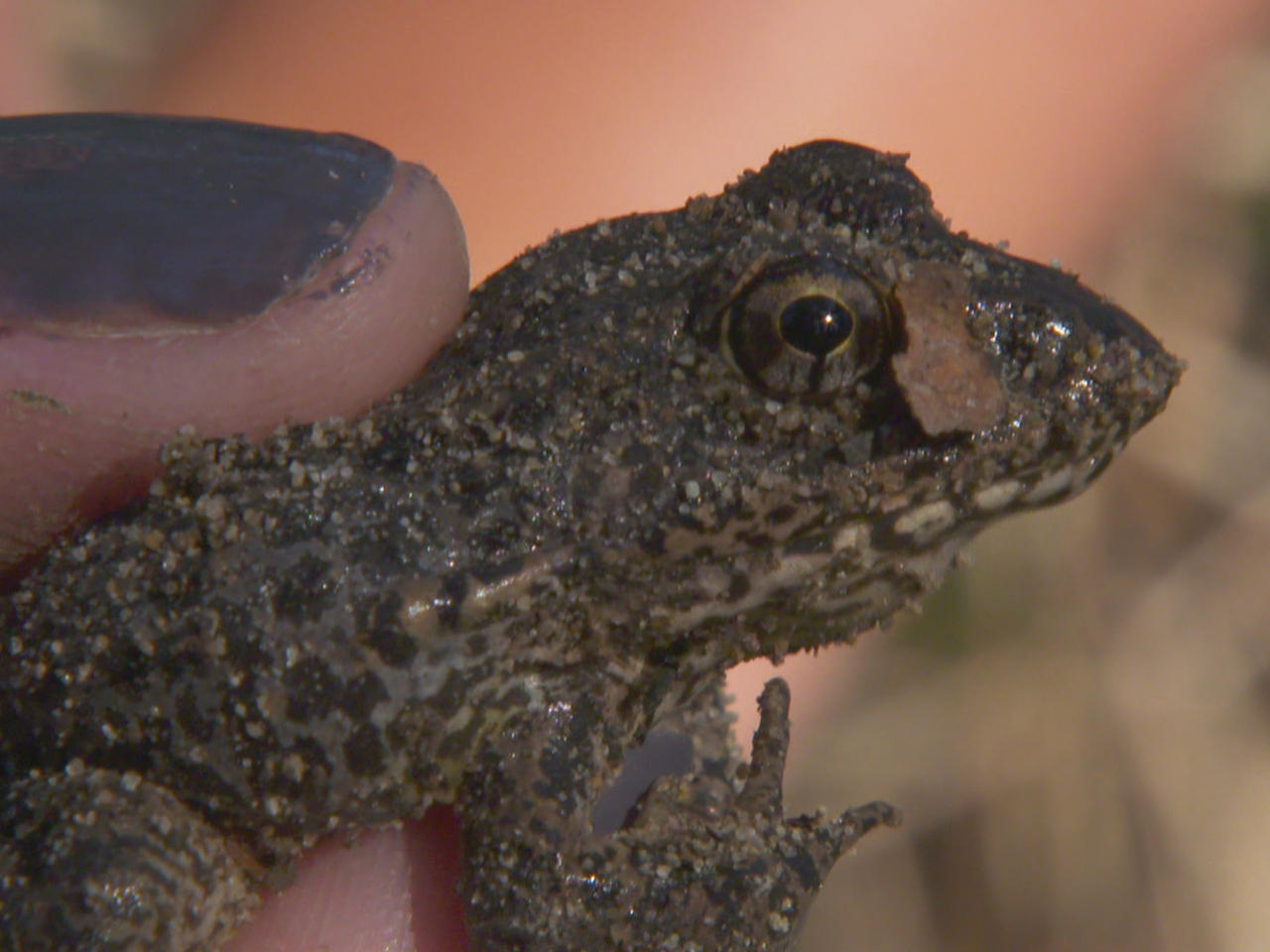 The very first broadcast of "Sunday Morning" on January 28, 1979, featured a report from Cobscook Bay, Maine, where bald eagles were on the brink of extinction.

"Someday if you are in the right place and if you are lucky, you will look up and see an eagle on the wing. It's a sight to stop your heart," said host Charles Kuralt. "The national bird is an endangered species."

Recovery takes time – a lot of time. Consider the dusky gopher frog, listed in 2001. Nearly two decades later, there are only 200 or so in the wild, all living around one Mississippi pond. Enter biologists bearing Tupperware.

It's a picture of the Endangered Species Act at work: Inside plastic bins are more than 300 frogs bred through in-vitro fertilization. "That one will be back in the spring to earn his pay," said one scientist releasing a frog into the wild.

They're being released at a second site in Mississippi in hopes that enough will avoid predators and disease to make it to adulthood and mate.

But time is just one of the challenges to saving a species. Another is money.

"We currently don't have enough money to recover more than probably 25% of all the species," said attorney Jake Li, the director for biodiversity at the Environmental Policy Innovation Center. "So, under current funding scenarios, we cannot recover everything. I'm not sure we can even save everything from extinction."

Li says, not only is there not enough money, the limited funds that do exist are frequently misallocated.

"So, there's huge biases in which species get the most money," said Li.

"The cute ones are a big part of it."

Li says if you're endangered or threatened, it definitely helps if you're also cute (like the Black-footed ferret), majestic (Grizzly bear), or economically valuable (Steelhead trout). Those are the species that frequently get the lion's share of government funds.

But for every polar bear or sea otter, there are hundreds more (like the Fairy Shrimp, the New Mexico jumping mouse, or the Purple Cat's Paw freshwater mussel).

Forty percent of endangered species are plants. Li said, "There are entire groups of Hawaiian plants that are very, very endangered. They're down to sometimes just a handful of individuals left."

And whenever one of these lesser-known species makes the news, it's almost always because of a conflict with one species: homo sapiens. From the snail darter in the '70s, to the spotted owl in the '90s, to the little dusky gopher frog, who leapt all the way to the Supreme Court last year, endangered species are at their most controversial when they endanger profits and property.

In 2011 the U.S. Fish and Wildlife Service told Edward Poitevent that about 3% of his family's 45,000 acres of land in Louisiana had been designated as "critical habitat" for the dusky gopher frog. But no frogs actually live there; they are all 40 miles away back in Mississippi.

Knighton asked Poitevent, "When you got that call, had you ever heard of the frog before?"

"Never heard of it, never," he said. "There's no realistic possibility that a caravan of frogs would hop down the road and magically find my land, by some sort of divine or froggy inspiration."

The government says the frog lived in this area before it was endangered, and Poitevent's land has the special ponds needed for its survival. "Well, the designation effectively takes our land out of commerce, because in order to develop it, we have to get the federal government's permission," he said.

"It's not that they have taken your land. It's still your land," said Knighton.

"No. But they've effectively taken it."

Earlier this month, the eight-year battle finally came to an end: the government abandoned its efforts to mark his property as critical habitat.

But despite these long, drawn-out struggles, every once in a while the Endangered Species Act works as fast as a fox.

At Channel Islands National Park in California, the Channel Island foxes had nearly gone extinct when they were added to the Endangered Species List in 2004. Today, they represent the speediest recovery of a mammal in the history of the act. The island foxes now show up even when you're not looking for them, as we discovered mid-interview with biologist Tim Coonan.

"Wow, it's right behind you!" Knighton said.

"Timing is everything!" said Coonan.

Knighton asked the Interior Department's Deputy Chief of Staff for Policy Gregg Renkes about it. "The law is very, very clear: A listing decision can only be based on the best available science and commercial information, not on the cost of listing the species," he said.

"But if you know that cost, don't you think that might influence whether people are more likely to protect it or not, if you hear that it's obscenely expensive?" asked Knighton.

"Well, I think the public has a right to know. And I think we want to be transparent in the decision-making process," Renkes replied.
Another change would likely reduce protections for threatened species on the list, the step below "endangered."

Renkes said, "We want to accomplish the objective of the Act. We want to protect and recover endangered species and threatened species. But we also do it in a way that strikes a regulatory balance, that protects people and the public from, you know, over-committing to this issue."

Changes to the Act are necessary, said Jake Li, but not ones that could make recovery more difficult.

"The Endangered Species Act has recovered 54 species; it's prevented hundreds from going extinct. But that's not good enough," said Li. "We need to find much better, faster, cheaper ways to make it work. Otherwise we're not gonna keep pace with the extinction crisis."

Many species may not have much time left. According to a recent United Nations study, plants and animals are becoming extinct at a rate faster than any time in human history.