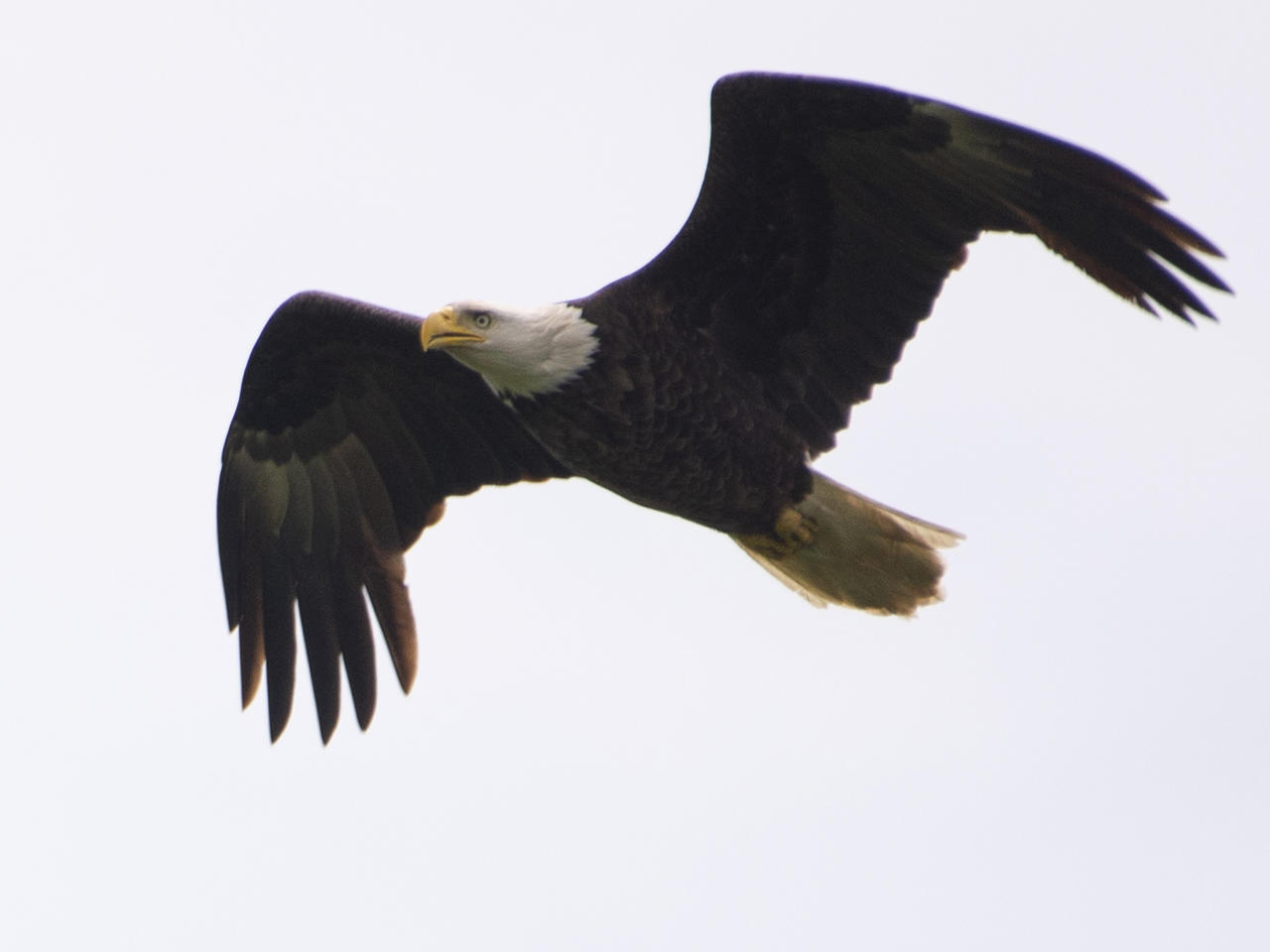 Bald eagles are the poster species for the Endangered Species Act, which they arguably inspired. During the early 1970s they were rapidly declining across the Lower 48 states due to the widespread use of organochlorine pesticides (like DDT), which made their eggshells too brittle to incubate, and thus made reproduction impossible in the wild.

In the mid-1960s there were only several hundred nesting pairs in the lower 48 states with the majority of those in just a few states in the western Great Lakes and Florida. Fortunately, their plight inspired thousands of Americans to pressure their representatives for comprehensive protection for our national symbol.

Banning the use of DDT, DDE and other highly-toxic pesticides was a key first step, but without active intervention it was dubious whether bald eagles would ever rebuild their population in the Lower 48 states to pre-"Pesticide Era" levels. Fortunately, the broad public outcry inspired a bold legislative response with passage of the Endangered Species Act in 1976, which included some strong rules to protect eagles from harassment, plus the creation of five regional recovery teams coordinated by the U.S. Fish & Wildlife Service working in cooperation with state fish and game departments in each of the five regions.

In New York state there were less than a couple handfuls of nesting pairs left at that point, mostly in the Adirondacks and Catskills. The goal of New York's recovery team was to add 10 nesting pairs to the state eagle population by importing and "hacking" (successfully releasing) eaglets from elsewhere, mostly from Alaska.

Over nearly two decades, a total of 198 eaglets were placed on tall "hacking platforms" constructed in several wildlife refuges including in western and central New York, starting with the Montezuma National Wildlife Refuge near Auburn, N.Y. As most eagles return to the area where they were raised and fledged, the hope was that a certain number of those "hacked" birds would return to nest in the central Finger Lakes area, once ready to breed four to five years later.

That is in fact what happened there, as well as at the Iroquois National Wildlife Refuge south of Medina, N.Y., which is also flanked by a pair of sizable state wildlife refuges to its east and west (the Oak Orchard and Tonawanda Wildlife Management Areas). In fact, within a decade there, there were nesting pairs of bald eagles on each of the three refuges.

Today, there is at least one more active nest among these three refuges, the one featured in my video broadcast on "CBS Sunday Morning" July 7. A pair of adult bald eagles unsuccessfully attempted to raise chicks in this same nest in each of the two prior years. Fortunately their third attempt was the charm, and they've now added two more strong healthy eaglets to the state's burgeoning population.

You can watch the full Iroquois National Wildlife Refuge video below:

Just two days after the broadcast, I observed the eagles, with the adults in one tree and both eaglets in another, 50 feet away, calling to each other at sunset – the perfect picture of a "double eagle" success story. While the eaglets are still being fed by their parents a month after first leaving the nest, they'll be on their own well before summer is over. Most likely, they'll begin their first migration south before fall starts, and may wander a fair bit during their first few years.

The hope is that within five years they'll return to western New York and begin adding to the state's burgeoning population of bald eagles, which reached an estimated 550 nesting territories in 2018. However, not all territorial pairs are actively nesting. In 2017 out of 495 territories, only 362 were actively nesting. With a state average of 1.3 eaglets fledged (having left the nest successfully) per nesting pair, this drops to slightly less than one new eaglet per year, per active territory, both nesting and non-nesting.

While the highest concentrations of bald eagle territories in New York State are in their historical hotspots of the Adirondack and Catskill Mountains – which abound with lakes, rivers and wetlands – bald eagles are also filling vacancies in other regions as well, notably the Finger Lakes and western New York, the Tug Hill Plateau and southern tier, as well as the Hudson Valley, and even Long Island and Metropolitan New York City itself. Without a doubt, bald eagles are the perfect poster species for the Endangered Species Act which they originally inspired, and they're living proof that we can save wildlife, and the habitats they need, so that they may survive and thrive, if and when we strongly commit ourselves to doing so.

This week on "Sunday Morning" (May 29)
Thanks for reading CBS NEWS.
Create your free account or log in
for more features.
View CBS News In
CBS News App Open
Chrome Safari Continue
Be the first to know
Get browser notifications for breaking news, live events, and exclusive reporting.