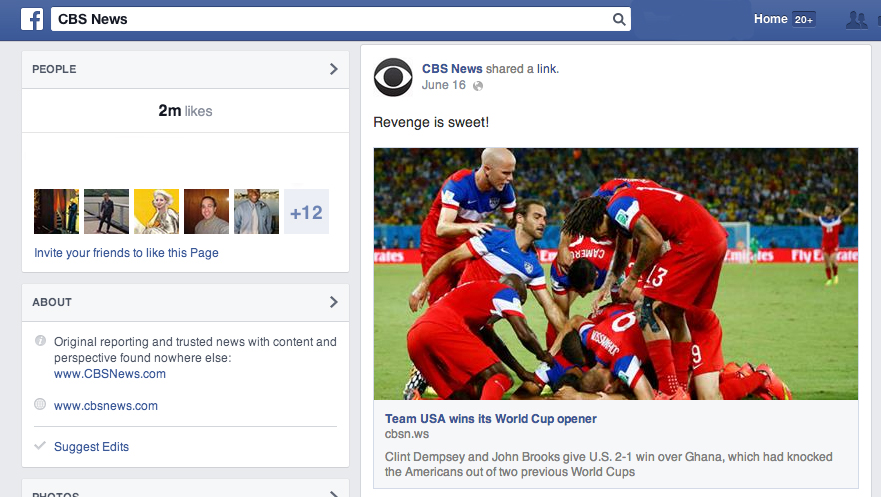 Through one week of the World Cup, Facebook has already seen more people having more interactions about the tournament on the social media site than it had for the Sochi Olympics, Super Bowl and Academy Awards combined.

A total of 141 million people have commented about, "liked" or shared posts on Facebook about the World Cup, the company said Friday. There have been 459 million different interactions on it.

Much of the action is international: 85 percent of the people talking about the World Cup on Facebook are from outside of the United States. There are 1.28 billion people on Facebook worldwide, 80 percent of them living outside the U.S.

"We always see a large level of conversation on Facebook around big sporting events," said Justin Osofsky, the company's vice president of global operations and media partnerships. "But what we're witnessing around the World Cup has been extraordinary."

Facebook has targeted the World Cup as part of its effort to become a site with more real-time conversation and news distribution around big events, functions where many people think of Twitter first. Facebook is promoting World Cup-related hashtags, has a special World Cup-related section and heavily promotes celebrity-related posts.

A photo posted by Pitbull, who performed at the opening ceremonies, has received more than 1.2 million interactions, as has a photo posted by Brazilian soccer star Neymar, Facebook said.

Facebook is also working with other media outlets to increase its exposure. One of the most prominent is Univision, the broadcaster with the Spanish-language rights to telecast the World Cup in the United States, which is featuring details about Facebook postings on its telecast.

"In a fundamental sense, we're just getting started," Osofsky said.