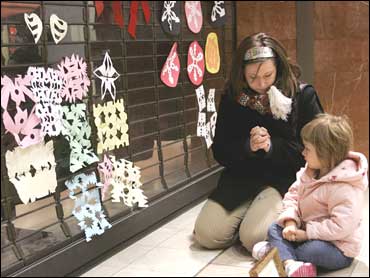 Three days after a gunman killed eight people and himself inside, a Nebraska mall reopened Saturday morning with extra security on hand and holiday shoppers waiting at the doors.

The scene of the shooting, the Von Maur store, however, remained closed. A spokeswoman said there is no schedule for its reopening, but the company hopes it will be soon.

Mall security videotape released Friday shows 19-year-old Robert Hawkins entering the department store Wednesday, leaving, then returning about six minutes later, clutching his midsection as if hiding something and stalking toward the elevators.

Police did not release video from the third floor, where Hawkins fired the gun. But a still image taken from the videotape shows Hawkins with his sleeves rolled up, aiming his AK-47.

Police said Hawkins fired more than 30 rounds inside the crowded mall, striking 11 people. Six died where they fell, one died on the way to a hospital and another died despite 45 minutes of emergency treatment at another hospital.

On Saturday, black tarps draped the inside of the department store doors. A note from management said the store will reopen soon. No date was given.

A makeshift memorial of flowers, notes and poems covered about two-thirds of the bottom steps of the entrance Hawkins used to enter the store. On display were eight foam snowflakes, each with a picture of a victim.

Omaha Mayor Mike Fahey greeted shoppers and reassured retailers that the city stood behind them as they struggled to regain momentum during the all-important holiday shopping season.

"I came in here and I was wondering how I would feel about it, but I feel fine," Fahey said. "I did not necessarily look at Von Maur ... but I feel fine."

The mall is safe, the mayor said. "We have a lot of officers on duty, and they will be on duty all day long."

The Von Maur company, which operates stores across the U.S. Midwest, said it had established a memorial fund for the shooting victims and their families and invited public contributions. It also said it was helping families of the eight victims with funeral arrangements and grief counseling.

Hawkins was a troubled teenager who spent four years in a series of treatment centers, group homes and foster care after threatening to kill his stepmother in 2002. He had recently broken up with a girlfriend and lost his job at a McDonald's.

"I've just snapped. I can't take this meaningless existence anymore I've been a constant disappointment and that trend would have only continued," he wrote in a suicide note left at the house where he lived.

Some who knew Hawkins said Friday that they tried to warn police about his recent behavior.

Kevin Harrington, who lived nearby, said he contacted police a month ago to report his and other parents' concerns that Hawkins and his friends had easy access to guns and sold drugs.

Harrington, 45, said he told police about a month ago that one of Hawkins' friends offered to sell Valium to his 13-year-old son. Harrington said he also told police that Hawkins had once shot at a car during a drug deal gone bad.