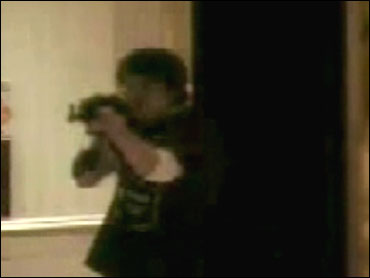 The gunman who killed eight people in a mall shooting "just snapped," he said in a suicide note released Friday that combines love for his friends and family with contempt for his random victims.

"I know everyone will remember me as some sort of monster but please understand that I just don't want to be a burden on the ones that I care for my entire life," the 19-year-old wrote. "I just want to take a few pieces of (expletive) with me."

Police released the three-page, handwritten note Friday after The Associated Press made a Freedom of Information Act request.

Also released were three surveillance pictures showing Hawkins in the minutes before he murdered eight people and wounded five others in an Omaha shopping mall before taking his own life.

Hawkins left the note Wednesday at the house where he lived, before he went to the Westroads Mall and opened fire in the Von Maur store, fatally wounding eight people before taking his own life.

The first page of the note was for his friends: "I love all of you so much and I don't want anyone to miss me just think about how much better you are off without me to support."

In the second page, addressed to his family, he wrote, "I've just snapped I can't take this meaningless existence anymore I've been a constant disappointment and that trend would have only continued."

He added, "I love you mommy. I love you dad," and expressed love for several other people.

The third page was his will: "I'm giving my car back to my mom and my friends can have whatever else I leave behind."

The surveillance photos show Hawkins walking into the mall - at first unarmed, wearing glasses, a black zippered sweat shirt over what appears to be a black Jack Daniel's T-shirt.

In another image recorded six minutes later, he returns and strides through an entrance decked with holiday decorations, an apparent bulge under his clothing.

In the third picture, he is shown with his sleeves rolled up, aiming the AK-47 to fire.

The images appear to contradict earlier reports that the gunman had a military-style haircut and entered the mall wearing a camouflage vest.

Out of respect for the victims and their families, the mall remains closed until Saturday, but no word on when Von Maur will reopen.

"I have seen tragedy before and they are all more or less alike," Lorraine Hedman, the victim's aunt, said. "You hurt and there is not a thing you can do about it."

Though he is being labeled a monster, Hawkins' best friend is still defending him.

"He wasn't a monster, he was a good person," Hawkins' best friend Craig Kovac said, though he also admitted, "I can t justify what he did.

"I feel really sorry for the victims," he added.

And there are new questions about why the 19-year-old high school dropout was released from state custody, according to CBS News correspondent Jennifer Miller.

Hawkins was put in a series of treatment centers, group homes and foster care after threatening his stepmother. State officials are defending their actions to let him go last year.

"This tragedy was not a failure of the system to provide appropriate quality services for youth that needed it," said Todd Landry, director of Nebraska Health and Human Services' Division of Children and Family Services.

After he was arrested and fired from his job in the last few weeks, Hawkins - in his own words - wanted to go out in style.

Meanwhile, another Nebraska teenager has been charged with threatening a girl who made statements the teen didn't like about Hawkins.

Five charges were read Friday against 17-year-old Davis S. Horvath of Bellevue, including one of intimidation by phone call. The other charges were for unrelated, prior incidents.

Bellevue Police Chief John Stacey says statements the teenage girl made about the gunman offended Horvath, who says Hawkins was his best friend.

Police found a rifle and two shotguns at Horvath's house when it was searched Thursday.