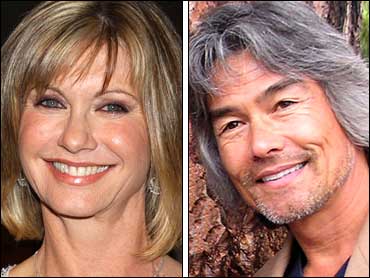 The Coast Guard says it is investigating the disappearance of Olivia Newton-John's longtime boyfriend, who failed to return from an overnight fishing trip off the California coast seven weeks ago.

Coast Guard officer Nathan Henise told The Associated Press Monday that McDermott was last seen on the fishing vessel and that his personal items were found on the boat.

"We're treating it as a missing person case," Henise told the AP. "Everyone is being interviewed, everyone on the boat."

Newton-John on Monday urged anyone with information on his disappearance to contact authorities.

"I'm hopeful that my treasured friend is safe and well, and I'm grateful to the officials who are working so hard to find Patrick, whom I love very much," she said in a statement. "I ask anybody with information that could help to please, please come forward."

It was the first public statement by Newton-John about McDermott's disappearance.

"But now that there are no more leads, no options here, she feels the public's help is needed, and the only way to publicize McDermott's disappearance is by her coming forward," The Insider's Lara Spencer said Tuesday on CBS News' The Early Show.

McDermott, a cameraman, and Newton-John, 56, have been together for nine years.

The search for McDermott is far from the first hurdle Newton-John has had to overcome. She is a breast cancer survivor, has worked to raise awareness for early diagnosis, and is active on behalf of many other causes including the environment.

Newton-John, who appeared in the 1978 movie "Grease" opposite John Travolta, was one of the most popular recording artists of the 1970s and early 80s. An award-winning songwriter as well as a performer, she has 33 years' worth of records and CDs, the most recent released last year, when one of her biggest hits, "Let's Get Physical," resurfaced in the box-office hit "Meet the Fockers."

Gavin de Becker, a high-profile security consultant advising Newton-John, said the singer is in "close and frequent contact" with McDermott's family and friends, as well as investigators.

Authorities said McDermott's family became concerned when he didn't attend a July 6th event. They contacted the Coast Guard after his car was found in the marina's parking lot on July 11.