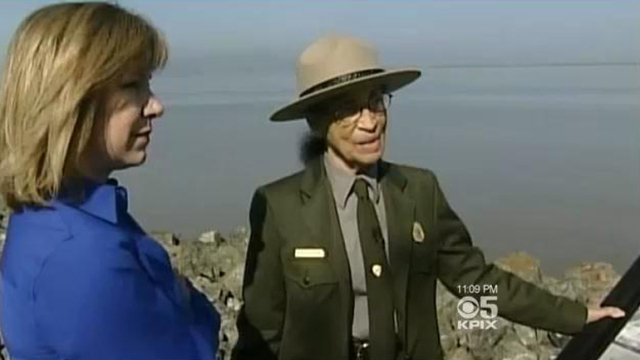 RICHMOND, Calif. -- A robber attacked the nation's oldest full-time park ranger in her San Francisco Bay Area home this week and made off with a coin she received from President Barack Obama, authorities said Thursday.

Betty Reid Soskin, 94, who works as an interpretive ranger at the Rosie the Riveter World War II Home Front National Historical Park in Richmond, was awoken by an intruder who punched her several times in the face, police Lt. Felix Tan said.

She reached for her cellphone but he grabbed it from her, dragged her out of the bedroom and beat her again, Richmond police said. She was able to crawl away to the bathroom and locked herself inside until the robber left early Monday.

"I fully expected he was going to kill me," Soskin told Bay Area news station KTVU-TV. "He doubled up his fist and hit me a couple of times on the sides of my face with all his might."

She called the encounter terrifying and said the blows bruised her face and split open her lips.

Police say the thief stole her cellphone, iPad, laptop, camera, jewelry and the coin the president gave her to honor her achievements. Soskin introduced him at the National Christmas Tree lighting ceremony at the White House last December.

She said most items she can live without, but the coin is special to her.

"If I can get that coin back, I think I can forgive anything," she told KTVU.

After a life in public service, Soskin became a park ranger about 10 years ago and leads tours at the historical California park and museum honoring the women who worked in factories during wartime.

A call to the park from The Associated Press was not answered. An email sent to a blog believed to be hers was not immediately returned. Police said she did not want to speak to reporters.

Before her appearance at the tree-lighting ceremony, Soskin made headlines in 2013 when she complained about a government furlough, saying she didn't have time to waste sitting at home at her age.

The shutdown began after Republicans demanded the defunding of the nation's new health insurance system in exchange for providing essential federal funding.