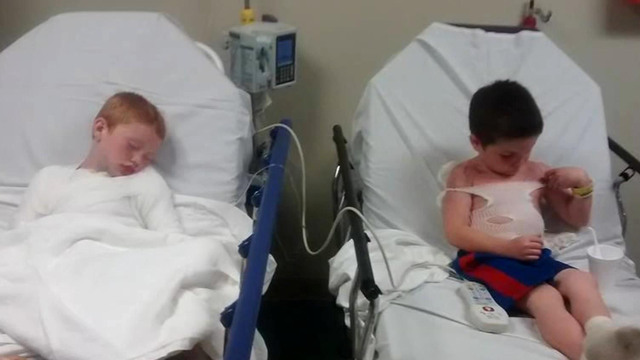 An Oklahoma mother says her two young sons were severely sunburned while in the care of a local daycare, CBS affiliate KOTV reports.

Shaunna Broadway says staff at "Happiness Is A Learning Center" in Vinita, Oklahoma, let her 5- and 7-year-old sons play outside Friday without shirts or sunscreen. When the boys got home their mother says they were crying and had large, painful blisters on their backs and shoulders.

"They didn't put no sunscreen on them and no shirt and when I asked them about it, they claimed they were out of sunscreen and that they told the kids to put on their shirts, but they didn't want to leave them on," Broadway told the station.

While regular sunburns leave the skin with a red or pinkish color, the sun can also cause severe second- or third-degree burns, which lead to painful blistering.

Broadway says her boys - 7-year-old Conner Harvey and 5-year-old Tray Wells - were sent home from two different hospitals with pain medication and cream, but neither provided her sons with relief.

"Then things got worse, especially with my oldest one. He started to started to complain of chest pains and not being able to breathe and his chest started swelling," she said.

That's when Broadway took her boys to the Hillcrest Medical Center Burn Unit in Tulsa. Within 10 minutes, she was told her sons needed to be life-flighted to Shriner's Hospital in Galveston, Texas, which has a children's facility that specializes in burns.

"To think that a kid could get that burned in the care of a daycare, I have no words," Broadway said.

Vinita police say a report was filed Sunday claiming that the children were sunburned when they went with the daycare to the city's new "splash pad" water playground on Friday.

"There is an active investigation, and we're looking into criminal charges right now," Bobby Floyd, Jr., the Chief of Police, told CBS News. "We're looking at neglect and possibly child abuse." He said charges could be filed some time this week.

Floyd also noted that there were seven other children at the daycare who did not get burned, including one described as having fair skin, suggesting to him that "there's more to the story" about the brothers' injuries.

The family shared numerous photos of the boys, many of them showing their backs and shoulders covered with blisters.

"Right's right, and wrong's wrong, and there's no excuse for this," Broadway said. "I'm a single parent, and I do all I can. I work Monday through Friday, and they have to go to daycare. I don't have the luxury to just have somebody that I can just have watch them outside daycare."

KOTV reached out to the daycare, but the manager said she had no comment. The daycare has been cited by the Department of Human Services 19 times in the past year, mainly for staffing, signage and scheduling issues, the station reported.

Broadway says she wants the daycare to take responsibility, so that what happened to her sons won't happen to anyone else.

"Whether it was intentional or not intentional, they were supposed to take care of them, and they did not - and that's the bottom line," she said.

DHS and the Vinita Police Department are investigating, while the boys continue to recuperate at the Texas hospital, where they're expected to remain all week.

"It's the well-being of my kids and seeing them in pain, I just want them back to normal," Broadway said.