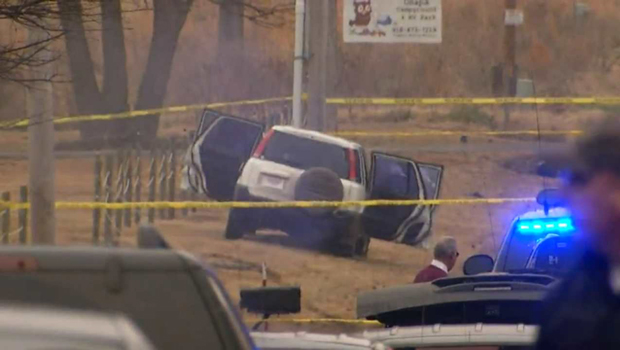 EUFAULA, Okla. -- A bank president was fatally shot during a robbery Thursday in eastern Oklahoma and the suspected gunman was killed after an ensuing car chase, authorities said.

FBI Special Agent Terry Weber said at a news conference that a man walked into the Bank of Eufaula, about 125 miles east of Oklahoma City, Thursday morning and shot a bank employee.

The suspect attempted to take another employee hostage on his way out of the bank, Weber said. When the woman resisted, the suspect shot her, then took a customer hostage and left the bank in a vehicle.

The Oklahoma Highway Patrol pursued the suspect and hostage.

Vincent said the trooper along with officers from two other law enforcement agencies were involved in a short exchange of gunfire with the suspect, who Vincent said was a black male dressed as a woman.

Weber said the suspect, who was later identified as 39-year-old Cedric Lamont Norris, was killed and the hostage was injured in the gunfire.

She and the female bank employee were both out of surgery and are expected to survive, Weber said.

It wasn't immediately clear who shot Norris or the hostage. The Oklahoma State Bureau of Investigation is handling that aspect of the investigation, Vincent said.

No law enforcement officers were injured during the pursuit or shootout.

The shootout took place near an RV park, CBS Tulsa affiliate KOTV-TV reports. Linda Paschen told the station she was in her RV about 100 feet away when shots rang out.