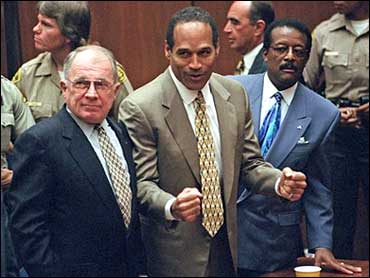 Monday marks the 10th anniversary of the not guilty verdict in the O.J. Simpson double murder trial. The trial lasted just under 10 months. However, the jury returned the verdict after only three hours of deliberation.

"That's one of those moments I think everyone remembers where they were," Associated Press special correspondent Linda Deutsch told Early Show co-anchor Julie Chen. "I was sitting right behind O.J. Simpson. It was dramatic and powerful. You had so many emotions coming together from the families of the victims, families of O.J. His son was weeping. The emotions were just palpable. And it was dramatic."

But you didn't have to be in the courtroom to feel the intensity of the trial. It was among the first to be televised to the entire nation.

"I think the O.J. Simpson case is the ultimate reality TV show," said Todd Boyd, professor of critical studies at the University of Southern California. "I think it really changed the way we think and talk about race and celebrity; the way trials work now. Whenever there's a big case now, you can guarantee that it's going to be on television somewhere because of O.J."

"I think that it made it very difficult for us to ever get cameras in the courtroom again," she said. "The media was under extreme scrutiny. And because the verdict was one that a lot of people didn't agree with, they felt maybe if we didn't have cameras there, it would have been different. But I don't think that's so. I think juries look at the evidence. They don't look at what's on camera."

When the verdicts were announced the reaction was split along racial lines.
For example, one white man and one black woman may have summed up the way most of the country's whites and blacks felt.

But the black woman was satisfied with the jurors' decision. "Justice has prevailed," she said. "Now they can find the real killer."

It was called the "trial of the century" because of it high profile and, until that point, much beloved defendant.

"It's a case that had everything," Boyd said. "There's multiple murders, there's a famous former football player who had become an actor, there are drugs, there's sex, there's violence, there's interracial marriage."

From the murder scene to the slow police pursuit of O.J.'s white Bronco, every moment played out in front of a national television audience.

On the 10-year anniversary of the murders, lead detective Phillip Vannatter tells national correspondent Hattie Kauffman, "I have seen worse crime scenes, but I have never seen a case that turned into the soap opera that this turned into."

Vannatter was on the scene when the bodies of Nicole Brown Simpson and Ron Goldman were found. Brown Simpson's neck was so badly slashed, she was nearly decapitated.

"Looking at the scene," Vannatter said, "you really couldn't tell what the injuries were other than it was mass trauma of some sort because of the amount of blood."

And the evidence showed blood spots leading away from the crime. "A blood trail that ultimately led right into the master bedroom of Mr. Simpson's home," Vannatter said.

Prosecutor Marcia Clark presented jurors with forensic evidence saying, "I've never seen so much evidence even on the first day, as I did in that case."

She was overshadowed by the charismatic Johnny Cochran, who made a show and tell of the trial. "If the glove doesn't fit, you have to acquit," he said to the jurors.

The cameras launched the media careers of Clark, fellow prosecutor Christopher Darden, O.J. Simpson's houseguest Kaeto Kaelin, and former detective Mark Furhman, whose use of the "n-word" took the focus off the murder.

Though acquitted, Simpson was shunned in Los Angeles. He later lost a civil case brought by the Goldman and Brown families. >This weekend he was reduced to signing autographs at a horror film convention.

"It was very strange. I was there. I talked with him," Deutsch said. "He insisted he really didn't know what the venue was when he came. That he had been hired by these promoters, and he came thinking it was a sports memorabilia thing, like everything else. For him, it was. He wasn't doing anything with the horror movies, but it was an odd location for him."

Simpson told Deutsch that he doesn't keep the dates in his head and that he didn't realize it was the anniversary.

"The only date he keeps is Nicole's birthday that he and the children celebrate with a cake," Deutsch said.

Deutsch said O.J. Simpson lives in Florida and spends time with all of his children. "He spends a lot of his time playing golf. He has friends. He travels. He does these autograph shows. He goes around the country giving out his autograph at sports memorabilia places. He still likes being a celebrity."