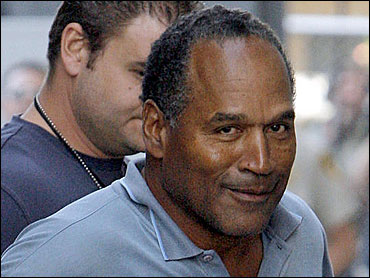 One of the new charges against O.J. Simpson could carry a possible life sentence, but the former NFL star's immediate concern is getting out of jail while he awaits trial.

Simpson's lawyer said he will make a plea for Simpson's release after his arraignment Wednesday, a day after prosecutors charged him with 11 criminal offenses, including first-degree kidnapping, which carries the possible life sentence. The charges are tied to a confrontation in a Las Vegas hotel room last week in which Simpson said he tried to reclaim sports memorabilia.

He has been held since Sunday in protective custody in a single 7-foot by 14-foot jail cell in a unit with 36 other inmates, separated from more than 3,000 other detainees in the downtown Las Vegas jail, police said.

Simpson's lawyer, Yale Galanter, said he planned to ask for Simpson's release on his own recognizance.

"We intend to vigorously represent Mr. Simpson on all charges. We believe ultimately he will be found not guilty," Galanter said. He refused to comment further on the charges announced Tuesday.

"Under Nevada Revised Statutes, you're entitled to bail unless it's a capital case," Abbatangelo said.

Simpson, 60, was booked on Sunday on five felony counts, including suspicion of assault and robbery with a deadly weapon. Clark County District Attorney David Roger filed those charges and added five other felonies Tuesday, including kidnapping and conspiracy to commit kidnapping, according to court documents.

CBS News legal analyst Andrew Cohen reports that under Nevada law, the crime of kidnapping is defined merely as confining someone against their will.

"Most people think kidnapping is when you take someone from Point A to Point B," Cohen says. "But in many states, including Nevada, kidnapping is more broadly defined to include confining someone against their will for a time, which is what the district attorney now alleging occurred during that so-called burglary."

The crimes Simpson and the other men are charged with will carry hefty sentences and therefore, will "put pressure on defendants who might be leaning toward turning on each other in exchange for a plea deal," Cohen says.

The Heisman Trophy winner was arrested after a collector reported a group of armed men charged into his room at the Palace Station casino and took several items Simpson claimed belonged to him.

Authorities allege that Simpson and other men went to the hotel room under the pretext of brokering a deal with two longtime collectors of Simpson memorabilia, Alfred Beardsley and Bruce Fromong.

According to police reports, Simpson and the other men entered the room and at gunpoint ordered the collectors to hand over several items. Beardsley told police that one of the men with Simpson brandished a semiautomatic pistol, frisked him and impersonated a police officer.

"I'm a cop and you're lucky this ain't L.A. or you'd be dead," the man said, according to the report. The man who arranged the meeting of the former athlete and the collectors, Tom Riccio, also told police a Simpson associate was "acting like a cop," the report said.

As his associates tried to seize cell phones, Simpson yelled and cursed the collectors, who Simpson has said were trying to sell items that had been stolen from him.

The memorabilia taken from the room included football game balls signed by Simpson, Joe Montana lithographs, baseballs autographed by Pete Rose and Duke Snider and framed awards and plaques, together valued at as much as $100,000.

Fromong, a crucial witness, was in critical condition Tuesday after suffering a heart attack the day before, according to a spokeswoman at Cedars-Sinai Medical Center in Los Angeles.

Two other defendants named in the complaint, Walter Alexander, 46, and Clarence Stewart, 53, have been arrested and released. A fourth suspect, Michael McClinton, 49, of Las Vegas, surrendered to police Tuesday. Police describe him as "a key player" in the suspected theft.

It wasn't immediately clear who McClinton's lawyer was Tuesday.

Police were seeking two other suspects, whom they had not identified.

Stewart, of Las Vegas, turned in some of the missing goods Monday before he was released on $78,000 bail.

Alexander was arrested and released Saturday without bail after agreeing to cooperate with prosecutors.

Simpson lives near Miami. He has been a tabloid staple since his ex-wife Nicole Brown Simpson and her friend Ron Goldman were killed in 1994. Although he was acquitted of murder charges, a jury later held Simpson liable for the killings in a wrongful death lawsuit.

CBS News correspondent Jennifer Miller reports Simpson's jailers describe him as cooperative and say that in addition to lawyers, he has been visited by the chaplain, who gave him reading glasses, a Bible, and a copy of the Christian evangelical book "The Purpose-Driven Life."