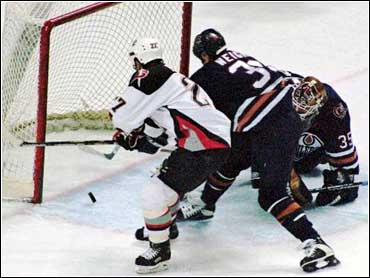 Ryan Smyth was lucky Sunday, and the Edmonton Oilers benefitted with a point in the standings.

Smyth scored the tying goal without really trying midway through the third period in the Oilers' 2-2 tie with the Buffalo Sabres.

Smyth's 20th goal came with 8:35 remaining in the third period when a backhander from along the goal line deflected off goalie Dominik Hasek's skate.

"I just threw it toward the net," said Smyth. "It was a lucky break. I was very fortunate."

"There's no excuse for goals like that," Hasek said. "He surprised me. He made a very fast move and there was exactly a tiny space."

"It wasn't much of a breakdown," Buffalo forward Eric Rasmusssen said. "It was a lucky goal, but it comes with the game."

Tommy Salo made 24 saves for Edmonton, which is unbeaten in five games (3-0-2). Mike Grier also scored for the Oilers, who are 5-2-2 during a stretch in which they have played eight of nine on the road.

Michael Peca and Geoff Sanderson scored for Buffalo. Hasek stopped 26 shots for the Sabres, who moved within two points of Pittsburgh for the eighth and final playoff spot in the Eastern Conference.

Sanderson had given the Sabres a 2-1 lead 4:48 into the third. After a turnover, Rasmussen slid the puck to Sanderson, who tipped in his ninth goal.

Grier opened the scoring, flipping a shot over Hasek's glove 13:28 into the game. Todd Marchant picked up loose puck at center ice and, after crossing the blue line, fed Grier in the slot for his eighth goal.

Peca tied the score with his 11th at 18:24 of the first. Vladimir Tsyplakov cleared the puck from a corner, and Salo failed to poke it away. Peca got a piece of it while tangled with an Oilers defenseman.

"I need to do whatever I can, no matter how big or how small, to win hockey games," said Peca, a 27-goal scorer last season who now has scored three times in six games this month. "It adds to my confidence level and makes me feel more a part of the outcome."

Buffalo fought off a five-minute short-handed stretch between the second and third periods. With 3:22 to go in the second, Maxim Afinogenov was given a major penalty for spearing Roman Hamrlik. Edmonton failed to get a shot during the entire five minutes.

"Killing off the five-minute major and a couple more minors (in the third period), you can't say enough about how hard they worked to get that point," Ruff said.

Both teams played their fourth game in six days. It was the only meeting between the clubs this season.

"Fourth games haven't been that kind to us," said Ruff. "Overall it was one heck of a battle."

"In the second and third periods, it was quite a bit slower," Salo said. "I think we played hockey in those two periods."