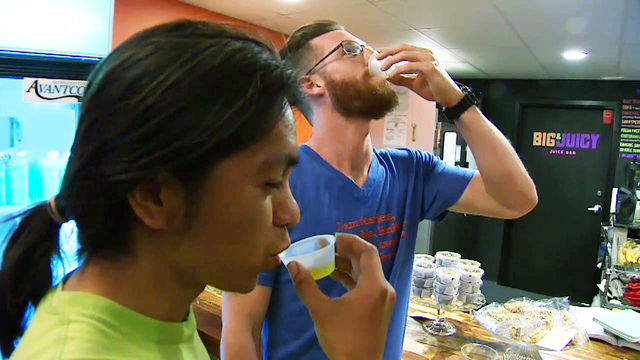 Most nights you might swish mouthwash around your teeth to stave off cavities and gum disease, but some folks are turning to a more slippery solution to gargle: oil.

Oil pulling -- or swishing and gargling oil in the mouth -- has long been used in traditional Indian culture because it was thought to prevent disease and eliminate toxins from the body. As CBS affiliate KHOU in Houston points out, some modern practitioners believe it improves oral health.

Proponents claim 20 minutes of gargling oil -- such as sunflower or sesame oil -- may prevent plaque buildup, whiten teeth, treat gum disease and kill bad breath. Some even claim it has health benefits for conditions ranging from arthritis to a hangover, according to KHOU.

The Indian alternative medicine practice Ayurveda claims oil pulling can prevent 30 different diseases by pulling toxins from the mouth that you can spit out. A 2011 study in the Journal of Ayurveda and Integrative Medicine says it has been used extensively as a folk remedy for many years to prevent decay, bad breath, bleeding gums, dryness of throat, cracked lips and for strengthening teeth, gums and the jaw.

"Well you know, it can't hurt. There is at least one study that shows it reduces strep bacteria in the mouth," Houston dentist Dr. Wayne Brueggen, told KHOU.

Dr. John C. Comisi, a spokesperson for the Academy of General Dentistry who practices in Ithaca, N.Y., told CBS News the science behind it makes sense for mouth health.

When we eat foods and sugars, he explained, an acidic environment is created in our mouths. This could lower the mouth's pH levels, leading to a rise in bad bacteria that erode tooth enamel, a process that "spirals downward" to result in dental caries, or cavities.

Oils are alkaline bases, which means they would neutralize the mouth's pH and drop the acid levels, reducing this bad bacteria and, theoretically, reducing cavity risk.

"The reality is if it helps in some capacity reduce the caries risk in a natural format... I can't see it being harmful at this time," Comisi said.

But he pointed out there is no hard scientific research to back up the claims. Also, he's unsure how many people are going to swish oil around for 20 minutes then rinse it out thoroughly after.

"Many people don't even take the time to effectively brush their teeth for two minutes," he said.