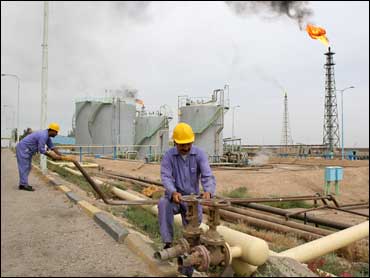 Iraq's parliament pushed back voting Saturday on this year's budget and could be forced to make further cuts because of falling oil prices.

The latest delay in trying to ratify the current $64 billion budget proposal highlights the financial squeeze facing Iraq as declining oil revenues cut into reconstruction plans such as new roads and improved utilities - which the Shiite-led government hopes to use as showcases in national elections later this year.

The pinch has also brought calls by Prime Minister Nouri al-Maliki for proposals to diversify Iraq's oil-dependent economy with expansion of agriculture and other trade. But Iraq's plans for this year have been dragged down along with the price of oil, which is now less than $45 a barrel after hitting highs last summer of $150 a barrel.

A Sunni lawmaker, Ayad al-Samarraie, predicted the budget will face more trimming after several previous cuts from its original $79 billion. The current budget is based on a $50 a barrel projection.

"We don't expect that oil will reach this price," said al-Samarraie, a member of the chamber's financial committee.

He urged lawmakers to take a comprehensive look at all spending, suggesting that more money go to electricity and other public projects at the expense of deeper cuts in other areas.

Shatha al-Mousawi, the Shiite member of the finance committee, called for possible sharp reductions in the National Security Adviser office, which was established shortly after the fall of Saddam Hussein in 2003. She said it has 377 employees and suggested cutting it to just 16.

"The studies and reports show that the falling oil prices will continue for two or three years," she said.

It was unclear when the budget could eventually come for a vote.

Army Lt. Gen. Frank Helmick, commander of Multi-National Security Transition Command, told The Associated Press that the budget crisis would force Iraq to make some very difficult decisions about how to grow its security forces.

"They are many, many hard decisions that they are going to have to make," he said.

He said U.S. military advisers have been making recommendations to the Iraqi security officials on possible ways to deal with the shrunken budget. An example, Helmick said, could be reducing the number of Abrams tanks sought by Iraqi forces.

He said essential services such as Iraqi police and military payroll, electricity and water could not be cut.

In Diyala province northeast of Baghdad, Iraqi forces arrested 11 suspected insurgents including the so-called "oil minister" of the self-styled Islamic State of Iraq, a purported political faction linked to al Qaeda in Iraq.

An Interior Ministry statement said Ali Mahmoud Mohammed and 10 other suspected insurgents were arrested in a raid in a Diyala village. No other details were given.

An al Qaeda front group announced the formation of an "Islamic Cabinet" in April 2007 in a bid to challenge the Iraqi government. The Cabinet purportedly includes the leader of al Qaeda in Iraq as "war minister."

In Baghdad, the head of the Iraqi High Tribunal said a mid-April trial date is planned for the first war crimes trial of Iraqis since the U.S.-led invasion.

Two members of Saddam's former Baath Party are accused of executing two British soldiers taken captive by a mob in southern Iraq in 2003. The exact trial date has not been set, said Aref al-Shaheen, the head of the Iraqi High Tribunal, which was set up to hear the cases against members of Saddam's regime.

The trials of Saddam and others have been under charges of crimes against humanity.

"It is the first case of war crimes ... The two wounded soldiers were killed instead of given medical treatment," said al-Shaheen.

At least 15 U.S. troops died in Iraq in February, including 12 who were killed in combat, according to an Associated Press tally. That compared with nine U.S. combat deaths in January.

A report from Iraq's Interior and Health ministries said 211 civilians were killed and 437 wounded in February - compared with 138 killed and 303 wounded in January. The figures were given by officials from the ministries who spoke in condition of anonymity because they were not authorized to release the information.