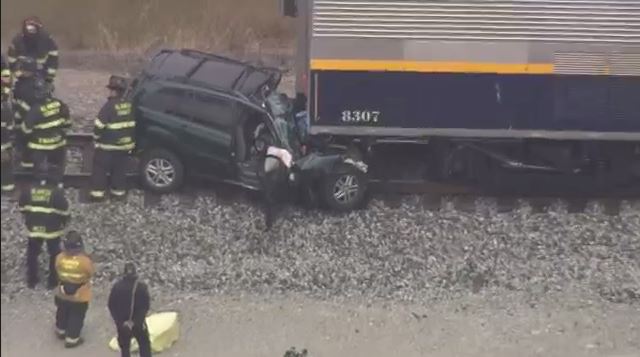 SAN LEANDRO, Calif. -- Fire officials say a woman and child are dead after an Amtrak train collided with an SUV in the San Francisco Bay Area.

Television news footage of the crash scene in San Leandro showed the front of the SUV crushed beneath the train. Alameda County fire spokeswoman Aisha Knowles says firefighters responded to the scene around 1:30 p.m. Tuesday for a report of a train crash with people trapped in the vehicle.

They confirmed the two deaths when they arrived at the scene.

Amtrak spokeswoman Vernae Graham says the crash occurred at a railroad crossing. Graham says there were 39 passengers on the train, which was bound for Sacramento from San Jose. None of them was injured.

Amtrak is currently looking into the status of the arm gates at the intersection at the time of the incident. It was not determined yet if they were down when the accident happened, CBS San Francisco reported.

Alameda County Fire tweeted out a photo of the scene shortly before 2 p.m. and confirmed that there were two fatalities in the collision.

The Amtrak crew was given go ahead by authorities to move the train from the location of the incident location shortly after 3 p.m., CBS SF reported.

At one point, four trains were delayed as a result of the incident, officials said. There were still some residual delays.