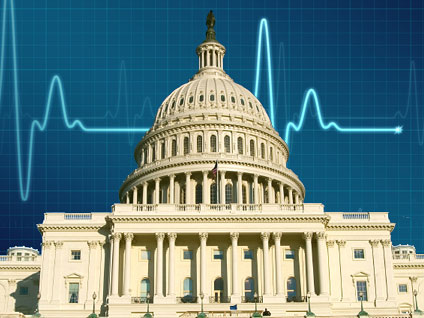 Though 14 states were quick to file lawsuits against the health care plan President Obama signed into law on Tuesday, senior administration officials dismiss the legal challenges as "completely without merit."

In a conference call arranged by the White House, the officials told reporters that such lawsuits are "nothing new."

Speaking on condition they would not be identified by name, the officials cited past legal challenges to Social Security, the Voting Rights and Civil Rights acts. They said those were unsuccessful just as they expect the current lawsuits against health care to end up.

The officials emphatically dismiss the argument that Congress lacks the authority to require all Americans to buy or otherwise obtain health insurance or pay a fee to be imposed by the I.R.S.

"We think that argument is false," said one official.

The officials contend that Article 1, Section 8, Clause 3 of the Constitution - known as the Commerce Clause - empowers Congress to regulate interstate business including health insurance. And the officials say the Supreme Court has reaffirmed that Congressional power.

Some states also challenge the provision in the new law that would compel them to establish health insurance exchanges. The officials say states have a choice: they can set up an exchange or not. If not, the federal Department of Health and Human Services will set it up instead, they say.

A number of state attorneys general view the new health care law as pre-empting authority given the states by the 10th Amendment. The administration officials deny the federal government is commandeering state power.

But what if the courts strike down one or more provisions of the massive health care act? Would it bring down the entire law?

The officials think that's "quite unlikely." A provision might be deemed unconstitutional, they say, but not the law as a whole.