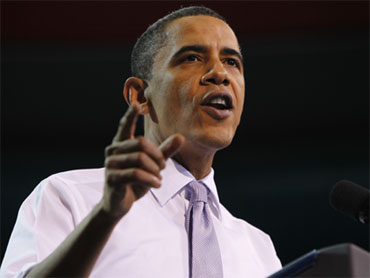 President Obama traveled to Iowa City, Iowa Thursday to continue his effort to convince the American people of the value of the health care bill he signed into law Tuesday. In his speech, he mocked Republicans for suggesting that passage of the bill means "Armageddon" and dared them to run on a platform of repealing the bill, as many have vowed to do.

"Now that we passed it, they're already promising to repeal it," he said. "They're actually going to run on a platform of repeal in November. And my attitude is, go for it."

"If these Congressmen in Washington want to come here in Iowa and tell small business owners that they plan to take away their tax credits and essentially raise their taxes, be my guest," he added.

The president said cable news talking heads are still "shouting about the end of the world" and said that Republicans are offering disingenuous suggestions that the bill means the "end of freedom as we know it."

"So after I signed the bill I looked around to see if there were any asteroids falling or cracks opening around the earth," he joked. "Turns out it was a nice day. Birds were chirping. Folks were strolling down the Mall. People still had their doctors."

"From this day forward," the president said, "all of the cynics and the naysayers will have to confront the reality of what this reform is and what it isn't."

Mr. Obama argued that the bill he signed is a moderate piece of legislation, and not, as Republicans claim, "a government takeover of our health care system."

He acknowledged that many of the legislation's provisions don't go into effect for years, and said that some aspects of health care coverage will remain "very frustrating" in the short term. He stressed the provisions that go into effect this year, among them tax credits for small businesses to pay for insurance and bans on insurance companies dropping people who get sick or turning away children with pre-existing conditions.

Other provisions taking effect in 2010 include a tax credit for seniors who hit the Medicare donut hole, a requirement that insurance companies provide free preventive care and a rule that young people be able to stay on their parents' policies until age 26.

"The days of the insurance industry running roughshod over the American people are over," said Mr. Obama.

Though Americans warmed to the bill slightly after it passed the House Sunday, according to CBS News polling, more still disapprove of the legislation than approve. With the midterm elections approaching in November, the president and Congressional Democrats are seeking to improve perceptions of the bill, and, with it, their party.

Iowa was the president's first stop outside of Washington following passage of the legislation, and Mr. Obama hailed it as "the state that first believed in our campaign." The state held the nation's first-in-the-nation presidential caucuses in the 2008 election cycle, which then-candidate Obama won.

"This is the state that inspired us to keep on going, even when the path was uncertain," he said. "And because of you, this is the place where change began."

He noted that he promised to sign a health insurance reform bill in Iowa three years ago and said it was "because of you" that he could.

"When the pundits were obsessing over who's up and who's down, and what's going on with the Obama administration, you never lost sight of what was right and what was wrong," he said. "You knew this wasn't about the fortunes of any one party -- this was about the future of our country."

At the start of his remarks, the president acknowledged Northern Iowa's victory in the NCAA men's basketball tournament over tournament favorite Kansas, the team the president had picked to win the tournament. "I feel a little bitter," he joked.

"I want to congratulate all the Northern Iowa fans in this part of the state on their big win," he said. "And since you ruined my bracket I'm rooting for you now. I want you to go out and take it. Go all the way."