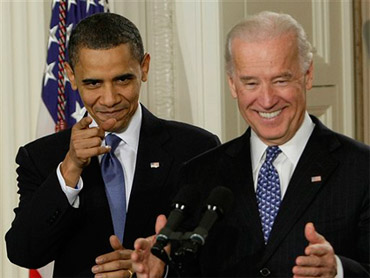 Watch CBS News Videos Online
Check out the video at left: In it, it appears that Vice President Joe Biden is telling President Obama at the bill signing for health care reform legislation this morning that passage of the bill is a "big f***ing deal."

Biden's performance in introducing President Obama at the bill signing showcased both his strengths and weaknesses: It was rousing, compelling, and, by the time he was quoting the poet Virgil, just a bit over the top.

There was the good: "Our children, and our grandchildren, they're going to grow up knowing that a man named Barack Obama put the final girder in the framework for a social network in this country to provide the single most important element of what people need, and that is access to good health," he said. "And that every American from this day forward will be treated with simple fairness and basic justice."

And the bad: "Mr. President, I've gotten to know you well enough that you want me to stop because I'm embarrassing you," said Biden, a hand on the president's arm. "But I'm not going to stop for another minute, Mr. President..."

Biden had a reputation for talking too much -- and occasionally saying the wrong thing -- long before he became vice president; his 2008 presidential run was sunk almost before it began when he called then-candidate Obama "the first mainstream African-American who is articulate and bright and clean and a nice looking guy."

But Biden got the gaffes under control as the campaign went on, performing well in debates and eventually winning over Mr. Obama, who was impressed by how working class audiences reacted to Biden. Yet Biden's propensity for saying the wrong thing still troubled the Obama team: When they offered Biden the vice president slot, as John Heilemann and Mark Halperin report in the book "Game Change," they did it on the condition that the gaffe-prone senator stay on script for the campaign.

Joe Biden will never stop being Joe Biden, however, as his apparent swear word and windy introduction this morning demonstrated; instead of keeping the focus squarely on the substance of the bill, which Democrats are trying to convince a skeptical American public is in their best interest, he gave media outlets a new potential gaffe to focus on.

This time around Mr. Obama did not issue the sort of stony look that he offered when Biden made a joke about Chief Justice John Roberts back in January (watch at left), but you can't imagine the president was happy that his #2 had become a distraction on a day that was supposed to be all about the historic passage of health care reform.

Then again, it's not like he didn't know what he was signing himself up for. Quipped John McCain when he heard that Mr. Obama had tapped Biden to be his running mate, according to "Game Change": "Well, good for Joe. But, boy, Obama will never get a word in edgewise now."

Details of the Bill:
Summary of What's in the Bill
Provisions Which Take Effect in Short-Term
Uninsured? What the New Bill Means for You
Already Insured? Get Ready to Pay More
Calorie Counts Coming to Many Food Menus
College Aid Reform Passes with Health Bill
Read the Text (PDF): Complete Senate Bill | Reconciliation Measure