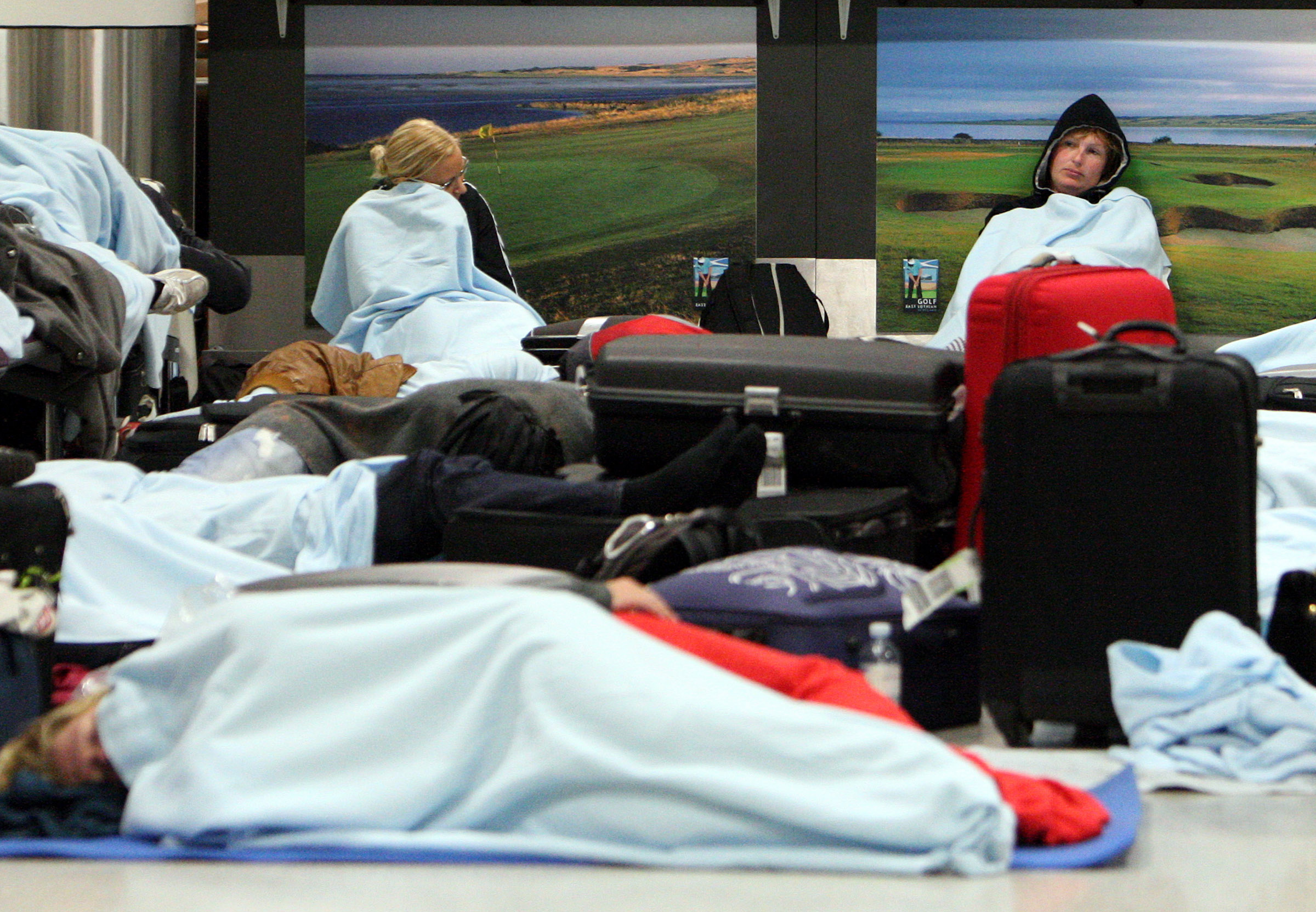 German weather authorities say airspace over the country's northern cities will close early Wednesday, due to elevated levels of ash in the atmosphere stemming from an Icelandic volcano.

The service said was possible the airspace over Berlin and Hannover could also be affected.

That is the latest development as airlines are moaning and passengers groaning as an ash-spewing Icelandic volcano is bringing misery and days of uncertainty to thousands of European air travelers.

Even though some say it's been a massive overreaction by badly prepared safety regulators -- one airline even claims the official scientific findings are simply wrong -- hundreds of flights were canceled Tuesday as winds blew the cloud of ash from the Grimsvotn volcano over Scotland. Experts say that particles in the ash could stall jet engines and sandblast planes' windows.

The only comfort for frustrated passengers and airlines is that officials in Iceland said the amount of ash being released by the volcano is decreasing, and officials don't expect the disruption to be as bad as last year, when millions were stranded after the eruption of Iceland's Eyjafjallajokull volcano.

Earlier, airlines clashed with regulators and pilots Tuesday as passengers braced themselves for days of uncertainty and chaos caused by a volcanic ash cloud being blown across the British Isles.

Britain's weather service said the ash from Iceland's Grimsvotn volcano had moved over parts of Scotland, prompting air regulators to warn airlines that they had to seek permission to fly to and from the area. Hundreds of flights were canceled in Britain and Ireland.

Spokesman Barry Grommett said volcanic ash had been detected on the ground in Scotland, and a specialist laser based on the Shetland Islands northeast of the Scottish mainland had also detected ash in the atmosphere.

"All the data we are receiving confirms our forecasts, that there is high-density ash over Scotland," Grommett said. Experts say that particles in the ash could stall jet engines and sandblast planes' windows.

But Irish budget airline Ryanair immediately challenged the results. It said it had sent its own airplane into Scottish airspace and found no ash in the atmosphere.

"Exactly as we predicted, we encountered absolutely no problems, Ryanair's chief executive Michael O'Leary told The Associated Press. "There's no cloud over Scotland. There's no dusting of ash on the airframe or the wings. The airspace over Scotland should never have been restricted in the first place."

Still, Ryanair was forced by Irish authorities to cancel all 68 flights in and out of Scotland for the rest of Tuesday. Seven other airlines -- most of them regional carriers -- also grounded their Scottish flights.

The problem also affected Sweden, where 10 domestic flights were canceled Tuesday evening. The country's aviation officials say they expect medium concentrations of ash over its western coast late Tuesday, including over its second-largest city Goteborg.

In Edinburgh, meanwhile, several hundred passengers faced either a patient wait or overnight stays in the city.

"I've been told I'll get home tomorrow, but who knows," said Kgeld Westh, an architect from Copenhagen. He was heading to a hotel in Edinburgh after his flight was canceled.

Among the crowds at the airport were soccer fans heading to Dublin for the international match between Scotland and Ireland.

"If all else fails we'll make our way by train and ferry," said Gary Clark, from Hamilton near Glasgow wearing a kilt and a Scotland shirt.

The main international body representing carriers, the International Air Transport Association, complained to the British government about the way it had handled the issue, saying it should have had Cessna planes ready to carry out tests, instead of relying on the weather service. British Airways said it sent its own verification flight, an Airbus A320, to Scotland late Tuesday to assess the risk.

But other airlines were more willing to follow official advice. Declan Kearney, spokesman for Aer Lingus, said it had canceled 20 flights between Ireland and Scotland.

"We take the advice given to us," he said. "We have no reason to question the advice being given to us by the aviation authorities at this time. We need to accept what the experts in this area are telling us."

The European Cockpit Association that represents pilots warned airlines against allowing their planes to venture into areas with even moderate ash concentrations.

The association "cannot accept under any circumstances any flights into the red zone, even if these are approved by airlines," said secretary general Philip von Schoppenthau.

Britain's Civil Aviation Authority said the high-density ash was in the skies above parts of Scotland by late Tuesday morning, and that it was likely to affect northern England and Northern Ireland in the afternoon.

The Grimsvotn volcano began erupting on Saturday, sending clouds of ash high into the air. The amount of ash spewing from the volcano tapered off dramatically on Tuesday, however, said Elin Jonasdottir, a forecaster at Iceland's meteorological office. She added that because the plume has decreased in height -- it's now at about 5,000 meters (16,000 feet) -- the ash won't travel far and will most likely fall to the ground near its source.

Earlier there were fears that the ash cloud might also affect France, but French civil aviation authority DGAC on Tuesday sounded an optimistic note.

"Forecasts for the next few days are promising, French airspace should be affected only very marginally by the volcanic ash," it said in a statement. "No closure of French airspace is currently envisioned."

Brian Flynn, head of network operations at Eurocontrol said between 200 and 250 flights had already been canceled on Tuesday, and warned that up 500 flights could be affected.

British Transport Secretary Philip Hammond said there had also been some "modest delays" to flights crossing the Atlantic, as aircraft need to avoid areas of high ash concentration. He added that there may be more delays later this week.

U.K. airspace was not closed, but some airlines would rather not take risks and were willing to follow official advice. EasyJet had 113 cancelations Tuesday in and out of Scotland, Newcastle and Northern Ireland. British Airways grounded 92 flights in total, and Dutch airline KLM canceled a total of 42 flights. Declan Kearney, spokesman for Aer Lingus, said it had canceled 22 flights between Ireland and Scotland.

"We take the advice given to us," he said. "We have no reason to question the advice being given to us by the aviation authorities at this time. We need to accept what the experts in this area are telling us."

The ash cloud forced President Barack Obama to shorten a visit to Ireland on Monday, and has raised fears of a repeat of huge travel disruptions in Europe last year when emissions from another of Iceland's volcanos, Eyjafjallajokull, stranded millions of passengers.

Above: This satellite image provided by NASA Sunday, May 22, 2011, shows the plume of dense ash from the Grimsvotn volcano in Iceland as it casts a shadow to the west. (NASA/AP)

Last year, European aviation authorities closed vast swaths of European airspace as soon as they detected the presence of even a small amount of volcanic ash in the atmosphere. This year, they are trying a more sophisticated approach.

Aviation authorities will give airlines information detailed information about the location and density of ash clouds. Any airline that wants to fly through the ash cloud can do so, if they can convince their own national aviation regulators it is safe to do so.

The closures are already affecting travel plans, In Ireland, a couple who were due to fly to Edinburgh for a friend's wedding were told their flight had been canceled. Anne and Damien Farrell decided on the spot to reclaim the car they'd just parked in Dublin Airport's long-term parking lot, drive the 100 miles north to Belfast, and take the ferry to the Scottish port of Stranraer.

"Fortunately we have a day of lead-in time before the wedding party gets going, otherwise we'd be up a certain creek without a paddle," said Damien Farrell, 29.

Norwegian airport operator Avinor said the ash cloud that swept over southwestern Norway earlier Tuesday has now moved away from the coast and no longer affects the airports in Stavanger and Karmoey. However, it said the ash is expected to return to southern Norway in the afternoon.

"Although we are partly dependent on the weather and the pattern of ash dispersion, we do not at this stage anticipate the widespread airspace closures and the prolonged disruption we saw last year," Kallas said.

Eurocontrol said the ash was not expected to affect trans-Atlantic flights because it was mostly north of the usual routes and was not reaching above 35,000 feet. Airliners crossing the Atlantic usually cruise at altitudes above 37,000 feet, where the thin air density reduces fuel burn.

Spanish airport authority Aena said two flights to the UK were canceled Tuesday morning. Spanish soccer team Barcelona plans to travel to London on Thursday for Saturday's Champions League final against Manchester United at Wembley Stadium, though club officials say they are monitoring the ash cloud disruption and could change their departure date.

Last year, Barcelona traveled to Italy by bus for a Champions League semifinal at Inter Milan because of the closure of European airspace.

In Ireland, a couple who were due to fly to Edinburgh for a friend's wedding were told their flight had been canceled. Anne and Damien Farrell decided on the spot to reclaim the car they'd just parked in Dublin Airport's long-term parking lot, drive the 100 miles (160 kilometers) north to Belfast, and take the ferry to the Scottish port of Stranraer.

"Fortunately we have a day of lead-in time before the wedding party gets going, otherwise we'd be up a certain creek without a paddle," said Damien Farrell, 29.