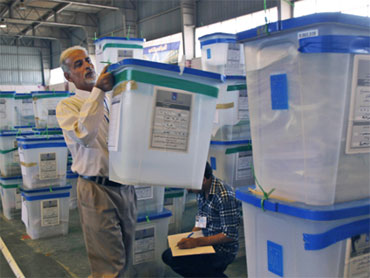 Election Day in Iraq was marked by blood, but despite insurgent attacks at polling places designed to keep voters away, killing at least 36 people, voters refused to be intimidated. President Obama called their courageous effort an important milestone.

CBS News correspondent Elizabeth Palmer called yesterday's balloting a mindboggling logistic exercise - ten million voters came out to 10,000 polling stations countrywide to vote for more than 6,000 candidates - and an important prelude to the next major stage of the U.S. troop pullout.

Appearing on CBS' "The Early Show" this morning, General Ray Odierno described the election as an absolute success.

"Iraqi security forces performed superbly," Odierno told anchor Maggie Rodriguez. "I think that over 8,000 polling sites, everyone stayed open throughout the Election Day. People were allowed to vote, young, old, all sex, across the country. I think it was very much a success for the Iraqi people yesterday."

Also on the program, U.S. Ambassador to Iraq Christopher Hill was optimistic about the prospects for Iraq's future - and ours.

"Well, obviously this is a very important election for Iraq's democracy. It will help set the tone for what kind of country Iraq will be for many years to come. They will put together a government very soon and they will reach out and get different coalitions.

Hill did not imply, however, that once winners are declared it would be easy for the newly-elected parliament to cross religious and ethnic divides in order to form a ruling coalition.

"No coalition right now has anything close to 50% of the vote, so what they're going to have to do is reach over to other coalitions," Hill said. "It will take some time. As President Obama said just last night, it will take probably months. But it's something that I think the Iraqis understand they need to do.

"And, frankly," Hill added, "the Iraqi people want to see some progress. They want to see jobs, they want it see an economy. And I think Iraqi politicians would not want to ignore that. So we look forward to a difficult process, but ultimately a successful process."

Gen. Odierno was asked by Rodriguez what would happen to the planned August withdrawal of U.S. combat troops from Iraq in the event the new Parliament cannot govern, or if violence escalates.

"We always will do assessments of the situation," Odierno said. "As I look at it today, we think we're on track to be down to 50,000 and change our mission. We obviously have contingencies in place and we'll take a look at that, but there's nothing today that tells us that we don't think the Iraqis will be able to form this government in a peaceful way and begin to move forward, so we certainly believe that we'll be able to go to 50,000 by the 1st of September."