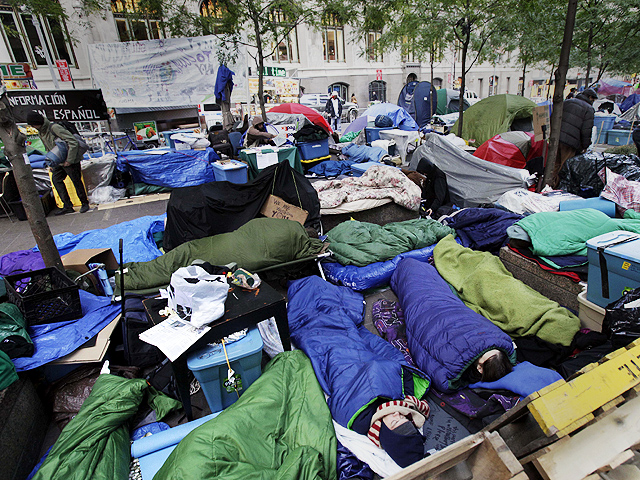 (CBS/AP) The Occupy Wall Street protests that sprang up to spotlight what protestors call corporate greed are also putting the spotlight on public health, as thousands of protestors rough it in parks under less-than-ideal conditions.

"Any time you have a large number of people in an event like this, there's potential for illness to spread rapidly," said Angelo Bellomo, director of environmental health for Los Angeles County. "Conditions can change within an hour."

In Philadelphia, inspectors found open human waste. Hypothermia cases developed in Denver after a snowstorm hit. In Oakland, poor food storage triggered a rat infestation. The storage problem, along with public urination and defecation, led Oakland police to dislodge 200 protesters from a plaza outside City Hall before dawn Tuesday.

In Philadelphia, sanitary conditions have worsened at the 350-tent Occupy Philly camp, said city managing director Richard Negrin. The camp's four portable toilets have not been cleaned or emptied regularly.

Health officials conduct daily inspections of Los Angeles' camp. They've directed organizers to dispose of wastewater from portable showers into drains rather than the ground. In addition, organizers have been asked to up the number of portable toilets, have them emptied twice daily and provide water jugs for hand-washing.

So far, no outbreaks of illness have been reported. Protesters in Denver, however, said they took two demonstrators to a hospital with symptoms of hypothermia during an snowstorm that started Tuesday night.

Some demonstrators said the health issues have been exaggerated as a pretext to crack down on the camps. Authorities did not seem to be concerned about unhygienic conditions that existed before, they said.

"They never go and clean up Skid Row," said Juan Alcala, a camper in Los Angeles, where more than 350 tents are jammed on a lawn around City Hall.

Mayor Antonio Villaraigosa told the Los Angeles Times that county health inspectors have expressed concerns over the cleanliness of the camp. The mayor also said the city's lawn and trees are suffering.

Although protesters formed a sanitation committee from the start, hygiene issues have gotten more complicated than Occupy LA organizers anticipated.

The camp is largely well kept, though numerous trash bins around the site were overflowing during recent visits. Organizers pay a private hauler $57 a week to collect the rubbish daily after being fined by the city for failing to remove trash.

Protesters said that overall, people were careful about rubbish. "I smoke and I'm really conscious about not throwing my butts on the ground," said another camper, John Waiblinger.

Personal hygiene has been more complicated.

Many people use showers at homeless shelters in Skid Row, while some have organized bathing trips to homes, said organizer Gia Trimble.

Others said they used the camp showers on site, filling up a plastic bag with solar-heated water or hot water from a City Hall faucet. The bag, which has a tube to spray the water, hangs from a cord.

Campers said they weren't worried about illnesses. Nevertheless, some were taking precautions.

Tommy Schacht, who was brushing his teeth with bottled water on a recent morning, said he goes home to shower and change clothes, and mostly used bathrooms at nearby businesses or public facilities instead of the portable toilets. He said, "I don't worry about that at all, but I try to stay away from people that are dirty."