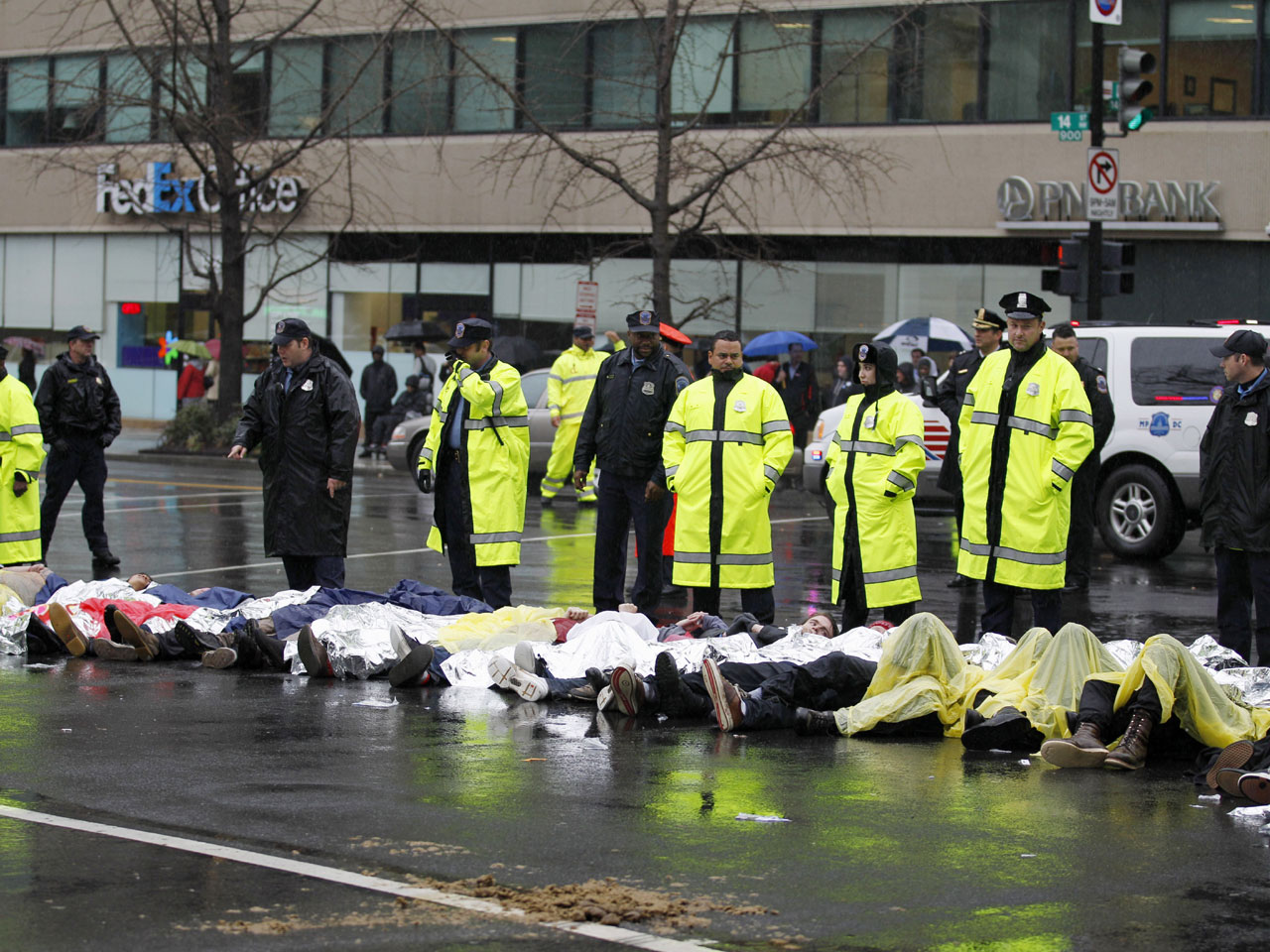 WASHINGTON - More than five dozen protesters upset about what they call corporate greed and the excessive influence of money in politics were arrested Wednesday after shutting down K Street, home to many of Washington's lobbying firms, in a mass demonstration that snarled midday traffic in the nation's capital.

The arrests came hours after police swept through a protest camp in San Francisco with just a five-minute warning, arresting at least 85 people and took down about 100 tents in an overnight raid.

Demonstrators from across the U.S. converged for the Washington march that included participants from Occupy Wall Street encampments as well as other groups, including unions, sympathetic to their message of income inequality.

Organizers said they expected several thousand people in Washington this week for days of activism, almost three months after the movement against economic disparity and perceived corporate greed began with Occupy Wall Street in New York.

Police arrested 62 people by 5:30 p.m. Wednesday, said spokeswoman Gwendolyn Crump. All but one were for obstructing a public highway, and the other was for a misdemeanor assault on a police officer.

About three dozen protesters were carried into police vans after lying down in the middle of a busy intersection and ignoring repeated orders to move. Their supporters on the sidewalk chanted, "This is what democracy looks like!" and "We are the 99 percent."

Earlier, 11 protesters affiliated with the American Dream Movement, which advocates for the working class, were arrested and charged with obstructing a public highway.

Later Wednesday, about a dozen more were arrested at the Supreme Court.

The arrests appeared to be the most since Occupy DC assembled earlier this fall at McPherson Square, just blocks from the White House. The group's relationship with police has been generally peaceful.

Teresa Law, 50, said she came to protest against corporate America and because jobs that the government promised would be created have not appeared.

Police have removed Occupy camps in a number of U.S. cities, using pepper spray and tear gas in some cases to get protesters to leave.

In San Francisco, about two dozen officers in riot gear remained at daybreak Wednesday after the overnight raid, blocking access as trash crews raked up paper and plastic bottles and removed chairs and other belongings that had accumulated at the protest camp over the past two months. City officials previously declared the site a public health nuisance.

Police didn't immediately say how many people were in the plaza at the time, but campers put the estimate at 150.

Richard Kriedler with Occupy SF said some protesters were injured in the sweep, but he didn't have details.

"This is a very emotional town. We have anarchists, we have very emotional people that this is not going to go over well with, and this could have been handled a lot better," he said.

In a statement, San Francisco Mayor Ed Lee said the city had taken a "measured and balanced approach," including making an alternate site available to protesters. That site — an abandoned school — included a parking lot where the protesters could maintain their encampment, a classroom for meetings, and two bathrooms.

The city had taken out a six-month lease on the property and offered to send city trucks to help the occupiers move to the new location. It had given the protesters until Dec. 1 to leave the plaza.