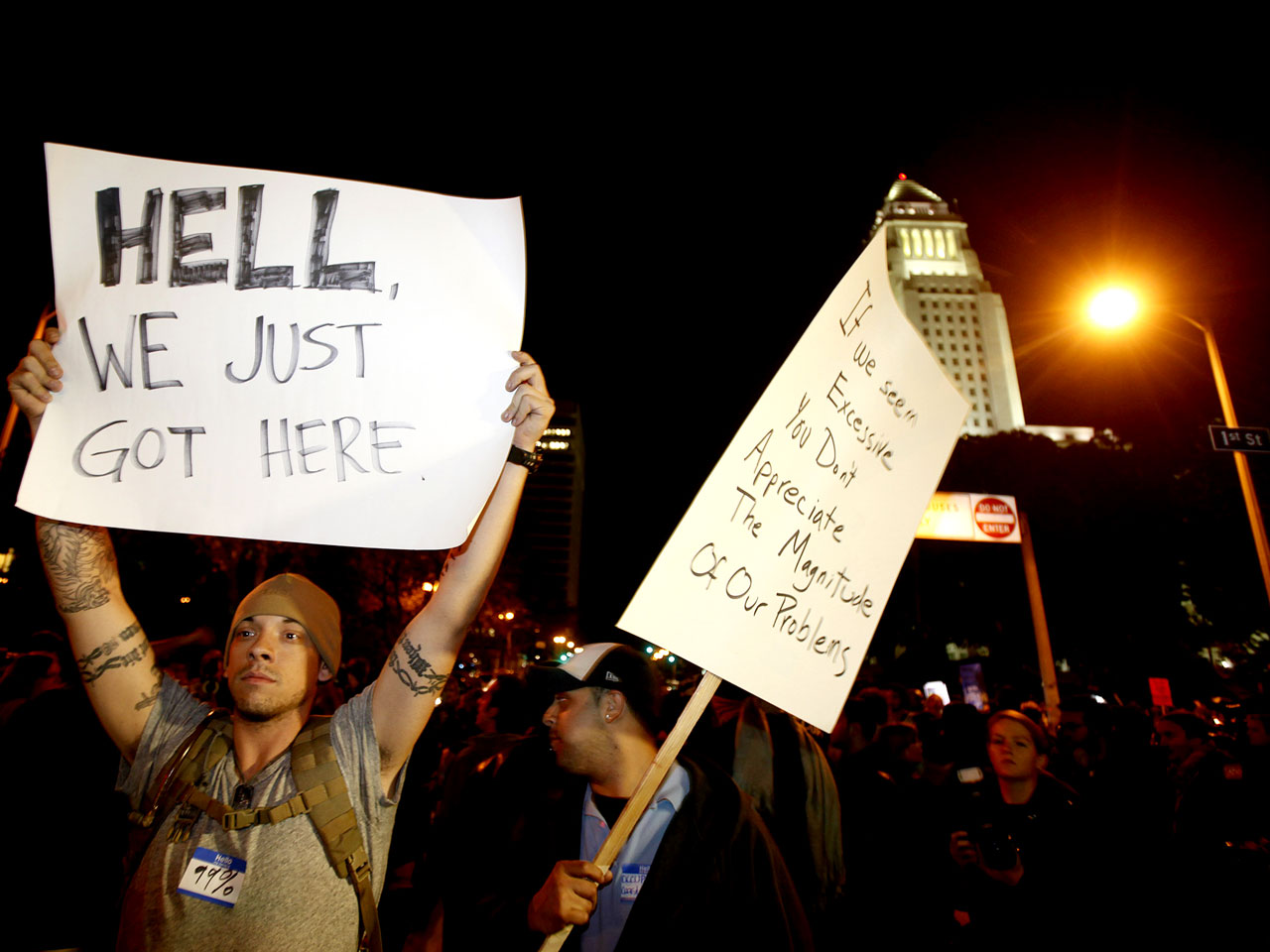 NEW YORK - The overnight police raids in Philadelphia and Los Angeles that dismantled two of the nation's biggest Occupy Wall Street encampments leave just a few major "occupations" still going on around the U.S. But activists are already changing tactics and warning of a winter of discontent, with rallies and marches every week.

The camps may bloom again in the spring, organizers said, and next summer could bring huge demonstrations at the Republican and Democratic conventions, when the whole world is watching. But for now they are promoting dozens of smaller actions, such as picketing the president in New York and staging sit-ins at homes marked for foreclosure.

"We intend to use this for what it is -- basically six months to get our feet underneath us, to get strong," said Phil Striegel, a community activist in San Francisco.

On Wednesday, masked sanitation workers hauled away 25 tons of debris from the lawns around Los Angeles City Hall after police raided the protesters' camp in the middle of the night and arrested more than 300 people. Mayor Antonio Villaraigosa said it would cost about $1 million to clean up the site. In Philadelphia, dozens of police patrolled a plaza outside City Hall after sweeping it of demonstrators and arresting 50.

In the past few weeks, police broke up encampments in such cities as Portland, Oregon; Oakland, California, and New York, where the sit-down protests against social inequality and corporate excesses began in mid-September. Protesters are still at it in places like Boston and Washington, which each had camps of about 100 tents Wednesday.

While some observers wondered whether the movement would wither without ground on which to make its stand, many protesters refused to concede defeat.

Protesters in Philadelphia planned a march from the city's well-to-do Rittenhouse Square to police headquarters Wednesday afternoon and also called for a "victory march" for Friday or Saturday.

"Occupy Philly is alive and well," said Katonya Mosley, a member of the group's legal collective. She said members have been communicating via list serves, text messages and email and planned to continue meeting in cafes and other spaces. Local groups have also offered to donate space for the protesters to continue meeting, Mosley said.

While one faction received a permit for a scaled-down protest across the street, she said, Occupy Philadelphia as a whole hasn't decided whether to go that route. The city has said any new permit would include a ban on camping

The Occupy movement is beginning to follow a familiar pattern, said Todd Gitlin, a sociologist at Columbia University and an authority on social movements. He noted that the 1960s anti-war movement grew gradually for years until bursting onto the world stage during the election year of 1968.

Until then, "I think there will be some kinds of occupations, but I don't think they'll be as big and as central," Gitlin said.

Protesters themselves were trying to draw lessons from history. On Thursday a group of protesters from Occupy Washington planned to set out on a march from the Martin Luther King Jr. Memorial on the National Mall to King's gravesite in Atlanta. Thursday is the anniversary of Rosa Parks' refusal to give up her seat on a Montgomery, Alabama, bus in 1955. That led to the yearlong Montgomery bus boycott.

The long fight for civil rights shows "how long these things take," said Kevin Zeese, an organizer of the Washington occupation.

In New York, protesters have continued to meet in Zuccotti Park, where the Occupy movement began, even though police cleared out their tents on Nov. 15. They planned to protest outside a fundraising dinner by President Barack Obama on Wednesday and a conference of aerospace executives Thursday that they branded a meeting of "war profiteers."

In St. Louis, protesters whose camp was broken up by police on Nov. 12 planned to march to the Federal Reserve Bank office on Thursday. John Mills, a technical writer, called the dissolution of the camp a minor setback.

"It's dampened some spirits, but I think people are just as passionate, just as excited and just as ready for change as they were before," Mills said.

In Atlanta, where protesters moved to a homeless shelter after police drove them out of Woodruff Park in October, organizer La'Die Mansfield said the group will participate in an international day of action in support of Egypt this weekend and occupy a home marked for foreclosure next week, as part of a national Occupy protest on that issue.