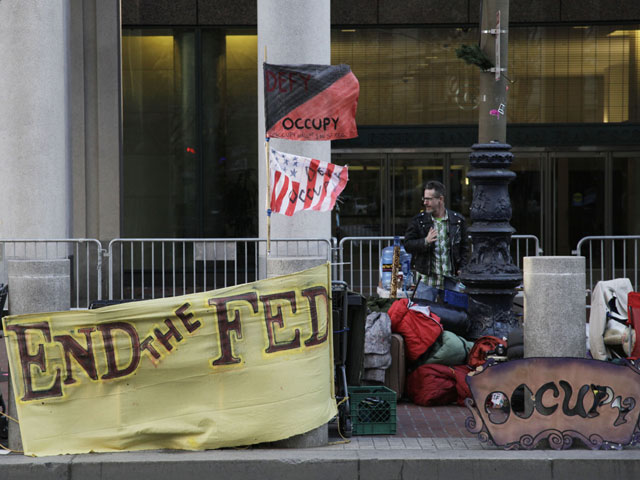 SAN FRANCISCO - Police gave protesters at San Francisco's Occupy encampment five minutes to gather belongings before taking down about 100 tents and arresting 70 people as officers dismantled the camp in an overnight raid.

About two dozen officers in riot gear remained at daybreak Wednesday, down from more than 100 who carried out the raid. They blocked access to the former camp site as trash crews raked up paper and plastic bottles, removed chairs and other belongings that had accumulated there over the past two months, and pressure-washed the sidewalks.

A handful of protesters stood by, occasionally jeering at officers but otherwise heeding their instructions to stay back.

Occupy protests: Month 3
Occupyers warn of a winter of discontent

The raid began around 1 a.m., when dozens of police cars, fire engines and ambulances surrounded the campsite at Justin Herman Plaza and blocked off the area. City officials previously declared the site a public health nuisance.

Police didn't immediately say how many people were in the plaza at the time, but campers put the estimate at 150.

"Most of the protesters went peacefully," but one officer received minor injuries when two people threw a chair that cracked his face shield, said officer Albie Esparza. They were arrested on suspicion of felony assault. Dozens of others were arrested for illegal lodging in the plaza and failure to disperse. In all, 70 people were taken into custody.

Jack Martin of San Francisco said he was trying to leave the plaza when he was zip-tied, taken to a police station, cited and released. Officers trashed his tent and personal belongings, he said.

"Everything I owned is gone," said Martin, 51, as tears welled up in his eyes. "My medicine, my paper for my Social Security."

He yelled at a line of officers blocking the plaza: "I was trying to get out of your way!"

Martin said he lost his job as a building manager and had moved into a hostel until about five weeks ago, when he ran out of money. Asked what he planned to do next, he replied, "Occupy, occupy, occupy, occupy."

Richard Kriedler with Occupy SF said some protesters were injured, but he didn't have the details.

"This is a very emotional town. We have anarchists, we have very emotional people that this is not going to go over well with, and this could have been handled a lot better," he said.

"A much more simple way to do it would have been direct contact with the mayor and city officials here with us, and even though they've been invited many times, they didn't come."

But San Francisco Police Chief Greg Suhr said the people at the campsite with whom officials had been holding discussions were no longer there.

"Negotiations had broken down," he told the San Francisco Chronicle. "We weren't getting our emails returned."

In a statement, San Francisco Mayor Ed Lee said the city had taken a "measured and balanced approach," including making an alternate site available to protesters. That site — an abandoned school in the Mission district — included a parking lot where the protesters could maintain their encampment, a classroom for meetings, and two bathrooms.

The city had taken out a six-month lease on the property and offered to send city trucks to help the occupiers move to the new location. It had given the protesters until Dec. 1 to leave Justin Herman Plaza.

In his statement, Lee said the city had negotiated with Occupy leadership in "good faith."

"But unfortunately, communication with the liaison team designated by Occupy SF deteriorated to a point where it was clear that no progress could be made," he said.

Kris Sullivan, 31, from Akron, Ohio, said many campers were sleeping and were taken by surprise during the raid. Sullivan, who said he had been at the camp for about two months, got his tent out but lost his pillow, mattress, blanket and another tent.

"They didn't even give much time for anyone to get out. They handled it really badly. They could have given us a warning or some sort of eviction notice," he said.

The tent city was set up in mid-October to protest bank bailouts and economic injustice.

Gene Doherty, 47, an Occupy protester who was not present during the raid but watched it on a live streaming website, said the Occupy protesters planned a noon rally at the site and still had several "mobile occupations" throughout the city.

"We will come back and reoccupy," Doherty said. "A large segment of our community has no other options. They don't have a home to go back to; this was their home."

Protesters will continue to "send a message that this is our right to protest, our right to assemble, and to talk about the economic injustices in the world," he said.