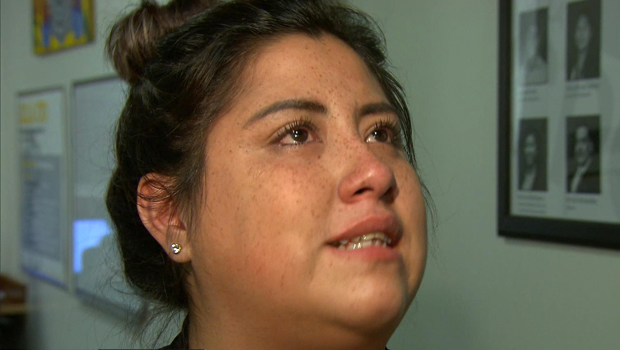 President Obama was in Nevada Saturday after making his new immigration policy official.

The president signed two executive orders as he flew west Friday. That means millions of children are relieved that their parents will now be eligible for legal immigration status under the policy.

They are celebrating, but some Americans oppose the change, CBS News' David Begnaud reports.

For 25-year-old UCLA student Arlete Pichardo, watching the president outline his executive action on immigration made for a memorable phone call with her undocumented mother, assuring her she's safe from deportation.

"You know, I came when I was 5 years old," Pichardo said. "She sacrificed her dreams so that we could have a better future."

Arlete's mother Maria brought her to the U.S. from Mexico on a visitor's visa. They overstayed. Maria went on to have two more children born in the U.S. and, because of that, now qualifies for a three-year work permit under the president's plan.

"It's unbelievable," Pichardo said. "It takes me back to two years ago when I got the news that I was going to qualify for deferred action."

That deferred action from the president gave Pichardo the chance to become one of the hundreds of thousands of so-called "dreamers" in California, eligible to work, legally. And now it's her mother who's benefiting from Mr. Obama's action.

"I think it's not enough, but it's definitely a step to the right direction," Pichardo said.

Patricia Moore opposes the president's executive action. She waited 15 years to become a U.S. citizen after legally immigrating from Colombia.

"I am a person that believes in law," she said. "I believe in a framework. In order to have a country that will respect my rights, I have to respect the regulations."

Despite opposition from people like Moore and thousands of others who've protested around the country, change is coming this time for Arlete's mother, even though she believes it's not enough.

According to the Public Policy Institute of California, the country's largest immigrant population lives in the Golden State - nearly 10 million people. Most are from Mexico, and 30 percent are undocumented.