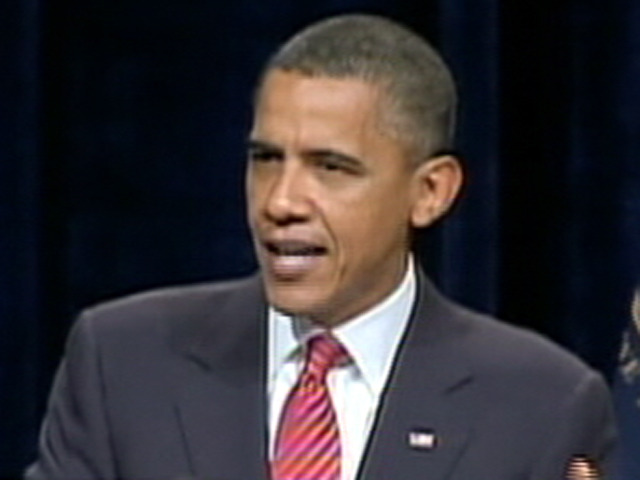 President Obama turned 49 without his family today, his wife and daughter traveling abroad and his other daughter at summer camp. But while the president will celebrate his big day without Michelle, Sasha and Malia, he's got plenty of Americans wishing him well (and both parties using the moment to score political points).

Mr. Obama will go home to Chicago tonight to spend his birthday night in his house in the city's Hyde Park neighborhood. With his family out of town, the president will spend the evening with friends.

Meanwhile, Mr. Obama's supporters will be celebrating his birthday across the country at events coordinated through Organizing for America, the grassroots arm of the Democratic National Committee. Volunteers are being asked to make cakes and submit them to the OFA website. The organization also sent out an e-mail from Michelle Obama asking supporters to sign a "birthday card" for the president.

Tomorrow, the DNC hosts some pricey parties in the president's honor. A party hosted by real estate mogul Neil Bluhm costs $30,400 to attend. Mr. Obama is expected to attend the Chicago event. Tickets for another Obama birthday DNC fundraiser cost $250.

Meanwhile, the Republican National Committee has created the website www.baracksbirthdaycards.com, which features of series of e-cards with all of the Democrats conservatives love to hate, such as House Speaker Nancy Pelosi and scandal-ridden Rep. Charlie Rangel.

The cards feature critical (if predictable) messages; a card with Senate Majority Leader Harry Reid's picture, for instance, reads, "Sorry no gift this year. I'm going to need every dime to defend our failed economic policies."