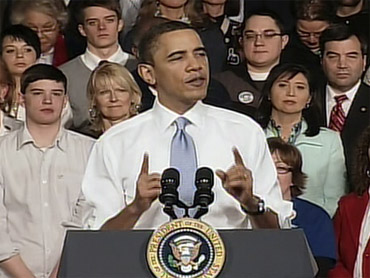 With a fresh sense of urgency, President Barack Obama sought to reassure seniors Monday about health care legislation approaching a final vote in Congress, pledging it would make preventive care cost-free and close a gap in Medicare prescription drug coverage.

"This proposal adds almost a decade of solvency to Medicare," Obama said in a visit to a senior center.

Obama's trip to Ohio marked his third out-of-town foray as he tries to build support for long-stalled legislation to remake the health care system. Administration officials have predicted the legislation will clear the House by the end of the week, but Democratic leaders had not yet released the measure as the president's helicopter lifted off from the White House grounds.

Confused about health care reform? Email us your questions and CBS News will try to answer them in the days ahead.

Even so, the House Budget Committee voted this afternoon for fast-track rules for health care legislation, the first step toward a decisive floor vote on the president's sweeping overhaul. The 21-16 largely party-line vote was a procedural but necessary step toward getting the historic legislation before the full House at the end of this week.

There was no word on whether Obama lobbied for his vote en route to Ohio. But shortly after the president began his public remarks, someone in the crowd yelled, "Vote yes," to Kucinich.

Obama asked Congress more than a year ago to approve legislation that extends health coverage to tens of millions who lack it, curb industry practices such as denying coverage on the basis of pre-existing medical conditions, and begin to slow the growth of health care nationally.

Legislation seemed to be on the cusp of passage in January, after both houses approved bills and lawmakers began working out a final compromise. But those efforts were sidetracked when Republicans won a special election in Massachusetts, and with it, the ability to block a vote on a final bill in the Senate.

Now, nearly two months later, lawmakers have embarked on a two-step approach that begins with the House approving the Senate-passed measure, despite misgivings on key provisions. That would be followed by both houses quickly passing a second bill that makes numerous changes to the first.

In the Senate, that second bill would come to a vote under rules that deny Republicans the ability to filibuster.

"We need courage," Obama said, adopting a line from an audience member that was directed at skittish Democrats.

A close vote is expected in the House, where a senior lawmaker said the leadership does not yet have enough support to pass the measure. Rep. James Clyburn, D-S.C., the party's whip, also said he was confident the bill would ultimately pass, and later identified four lawmakers who voted against the legislation once but could switch sides in the coming days.

Republicans, determined to kill the bill, immediately highlighted the four: Reps. Jason Altmire of Pennsylvania, Brian Baird of Washington state, John Boccieri of Ohio and Bart Gordon of Tennessee, while also noting Obama's earlier statement that elections will sort out political winners and losers. It was a none-too-subtle warning that any supporters of the bill can expect a tough challenge in the fall.

Baird and Gordon have announced plans to retire.

There was evidence the White House and Democratic leadership were making headway in their lobbying. Rep. James Oberstar, D-Minn., who supported strict abortion limits when the bill cleared the first time, said he was prepared to vote for the revised measure even though the same limitations will not be included.

Obama traveled to the hometown of Natoma Canfield, a cancer victim who wrote the president that she gave up her health insurance after the cost rose to $8,500 a year. Obama repeatedly has cited that letter from a self-employed cleaning worker who lives in the Cleveland suburb to illustrate the urgency of the massive overhaul.

Canfield's sister, Connie Anderson, introduced Obama at that event. She received a hug from the president at the conclusion of her remarks.

"I know we've got some seniors with us today," said the president, his jacket off and shirt sleeves rolled up. "So let me just tell you directly: this proposal adds almost a decade of solvency to Medicare."

He said it also would close a gap in prescription drug coverage know as a doughnut hole. "This proposal will over time help reduce the costs of Medicare that you pay every month. And this proposal would make preventive care free so you don't have to pay out-of-pocket for tests that keep you healthy."

Obama did not discuss details, but officials have said the gap in prescription drug coverage would close over a decade.

Protesters arrived hours early, lining several blocks leading to the senior center. They stood in a light drizzle, waved to passing vehicles and held signs including "Don't stick me with your Obamacare," "Start over," and one decorated with 12 skull and crossbones and the message, "Obama care, it's to die for."