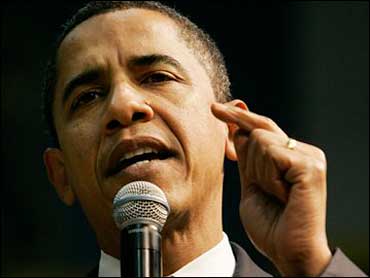 Barack Obama is walking a tricky racial line, trying to excite black support in the South without getting tagged as "the black candidate" and scaring off anybody else.

At a spaghetti dinner in the basement of a black church this week, he told a cheering crowd the civil rights movement started from the bottom up, with marches and boycotts. "That's how change comes," he said, linking black civil rights to his own campaign slogan.

But here in South Carolina, which has its Democratic primary Saturday, he also says over and over that color doesn't matter.

The same day as the church dinner, he told an audience at Winthrop University in Rock Hill, "If I came to you and I had polka dots but you were convinced that I was going to put more money in your pockets and help you pay for college and keep America safe, you'd say, 'OK, I wish he didn't have polka dots, but I'm still voting for him."'

A new McClatchy/MSNBC poll holds warning signs for Obama. He leads Hillary Rodham Clinton in South Carolina, but his support among white Democrats fell in one week from 20 percent to a mere 10 percent after race became more of an issue in the campaign.

Blacks comprise large portions of the Democratic electorate in Deep South states, and they could help Obama win a handful of primaries, including South Carolina's. Indeed, after the results are in Saturday night, he's heading to Macon, Ga., and then on to Alabama on Sunday for campaigning.

But the more Obama is seen through a racial lens, the more it might hamper him in other, bigger states, especially those where voters might be unaccustomed or unwilling to support black candidates.

Clinton's campaign isn't interested in helping him resolve that situation.

Her strategists deny any effort to stir the racial debate, but they say they believe the fallout has had the effect of marking Obama as "the black candidate," something he has worked to avoid.

Bill Clinton reminded a South Carolina audience this week, even as he linked Obama and Hillary Clinton as historic candidates.

"They are getting votes, to be sure, because of their race or gender," he said. "That's why people tell me Hillary doesn't have a chance of winning here."

Taking a softer tone, he said Friday in Spartanburg that "we have the largest percentage of Americans we've ever had who are literally aching to live in a post-racial future." People's backgrounds are important, he said, and we "celebrate them but believe that our common humanity matters more."

Obama was asked Thursday if he thought the Clintons were trying, to his detriment, to depict him as the black candidate.

"I'll let the Clintons speak to what their strategy is going to be," he said coolly.

As for his own campaign, he said his public career has been "based on the idea that we're all in it together, and that black, white, Hispanic, Asian, all of us share common dreams, common fears, and common concerns."

That approach, he said, won him votes "across the board" in Iowa, New Hampshire and Nevada, and will elsewhere.

Still, former South Carolina Gov. Jim Hodges, who is supporting Obama, said he believes the Illinois senator will win Saturday in part because "black turnout will be higher than people expect." It might hit 55 percent of eligible black voters, he said, strikingly impressive for a primary election.

Obama, the son of a black father from Kenya and a white mother from Kansas, must juggle race-related matters that sometimes seem to conflict. He must convince blacks that America is ready to elect someone like him, so their votes for him will not be wasted and their hopes dashed. At the same time, he says voters can embrace him without regard to color.

The racial minefields haven't kept him from having fun with heavily black audiences in South Carolina this week.

The Harvard Law School graduate sometimes playfully breaks into vernacular, which seems to amuse him and his audiences greatly.

James Thrower, a federal employee from Sumter, was among the black voters charmed by Obama this week.

"In the beginning of this campaign, I didn't think America was ready" to elect a black president, Thrower, 50, said after one rally. "Now I do."

"This country needs some fresh blood," he said.

Both Clintons, campaigning separately, have wooed black and white supporters in South Carolina this week. An event Wednesday in Kingstree underscored the tension and suspicions animating the rivalry.

After fielding questions from an audience of about 200, Bill Clinton called on a black man standing near the stage. The man said he was a pastor and told Clinton that "black America is voting for Obama because he's black." He said Democrats are in a dangerous position because if Obama wins the nomination, voters will elect a Republican in November. "They're not ready for a black president," he said.

"I have to tell you I hope you're not right," Clinton responded.

He said that despite the "mean things" said about him "in the Obama camp this week," he would support the Illinois senator if he is nominated.