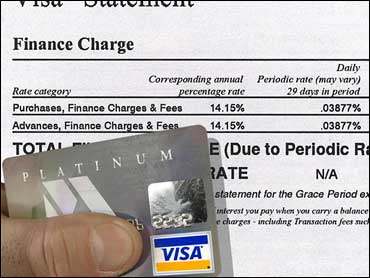 The White House took aim today at banks who've been hiking fees and credit card rates just as consumers have been hit hard by the economic downturn.

"People are not paying their credit card bills. More people are getting into trouble financially as they lose their jobs. So banks have retaliated more or less in terms of what they are doing to the customers," said Joan Goldwasser of Kiplinger's magazine.

Chase has added a $120 fee on some of its "no fee" cards. American Express raised its late fees on some cards from $29 to $39. And Bank of America and Chase have doubled interest rates on some customers, to up to 30 percent.

Penalty fees are also growing. Banks raked in $19 billion in penalties in 2008, up 5 percent from the year before.That's projected to rise to $20.5 billion this year.

New federal regulations kick in to protect the consumer in July, 2010 but Congress - and now, President Barack Obama - want to see that happen faster.

"He's going to be very focused in the very near term on a whole set of issues having to do with credit card abuses, having to do with the way people have been deceived into paying extraordinarily high rates that they wouldn't have paid if they knew they were getting themselves into," Larry Summers, the president's top economic advisor, said on NBC's "Meet the Press."

That comes none too soon for the folks paying those fees.

CBS News talked to consumers who said their interest rates had shot up recently. One said that he couldn't keep his credit rating steady even though he pays off his credit card bill every month.

Banks argue that they are the ones caught by the credit crunch, and that hiking fees is a matter of their economic survival. Credit card borrowing is actually down 9.7 percent in 2008. Meanwhile, credit card users are defaulting on payments in record numbers more than 5.5 percent in the fourth quarter - one of the highest delinquency rates ever.

The president will meet with the heads of 14 credit card companies this week. Bank of America has already made changes - it just suspended a hike in overdraft charges, and it's now waiving some fees for customers who have lost their jobs.