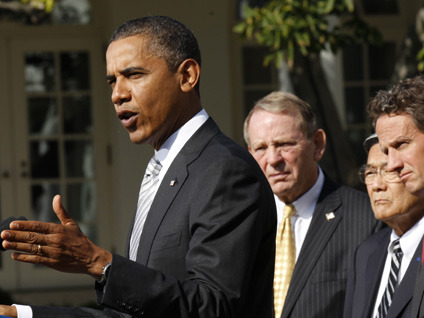 In a speech in the White House Rose Garden this morning, President Obama pushed for bipartisan support of increased funding for transportation initiatives, and emphasized that a "fundamental overhaul" of the country's "woefully inefficient" transit system was necessary to reduce unemployment and remain competitive on an international level.

The president, speaking alongside former Secretaries of Transportation Samuel Skinner and Norman Mineta and Secretary of Treasury Timonthy Geithner, said that the six-year initiative - which has been pegged at approximately $50 billion - would not only repair and modernize U.S. roads, rails, and air systems, but also provide much-needed work opportunities for hundreds of thousands of Americans.

"We can no longer afford to sit still," Mr. Obama said, pointing out that the average American pays twice as much annually on transportation as on food.

Mr. Obama outlined a plan for improving and restoring roads, implementing a smarter and more secure national electric grid, and moving forward on projects that would give communities increased access to broadband internet and national rails.

"There's no reason why we can't do this," Mr. Obama said, adding that the plan would create "good middle-class jobs right now."

Mr. Obama, who first announced the initiative over labor day, also emphasized that, without the stated improvements to American infrastructure, the U.S. would lack the ability to be economically competitive on a global level. He cited superior efforts by Russia and China to improve and increase national public transit.

"The longer our infrastructure erodes, the deeper our competitive edge erodes," the president said. "Everywhere else, they're thinking big. They're creating jobs today, but they're also playing to win tomorrow."

According to the New York Times, most of the new jobs created by the initiative would be in the construction industry - which has been hard-hit by the economic recession, and suffers a jobless rate of 17 percent. (The national unemployment rate is only 9.6 percent overall.)

A recent report conducted by economists at the Treasury Department and Mr. Obama's Council of Economic Advisers also says that high unemployment and low costs make now the "optimal time" to invest in public infrastructure.

Furthermore, recent studies indicate that Americans are dissatisfied with the U.S. transit infrastructure: The Hill reports that of 32 countries in the Organisation for Economic Co-operation and Development (OECD), the United States ranks 25th on their happiness with public transit and 17th on roads and highways.

In his remarks, Mr. Obama pushed for bipartisan support of the project, citing that improving American infrastructure was historically an issue that won political support from both parties.

"This is work that needs to be done," he said. "All we need is the political will."

House Minority Leader John Boehner objected to Mr. Obama's infrastructure plan when he announced it in September, arguing that "we can't spend our way to prosperity."

Lucy Madison is a political reporter for CBSNews.com. You can read more of her posts here. Follow Hotsheet on Facebook and Twitter.
View CBS News In
CBS News App Open
Chrome Safari Continue