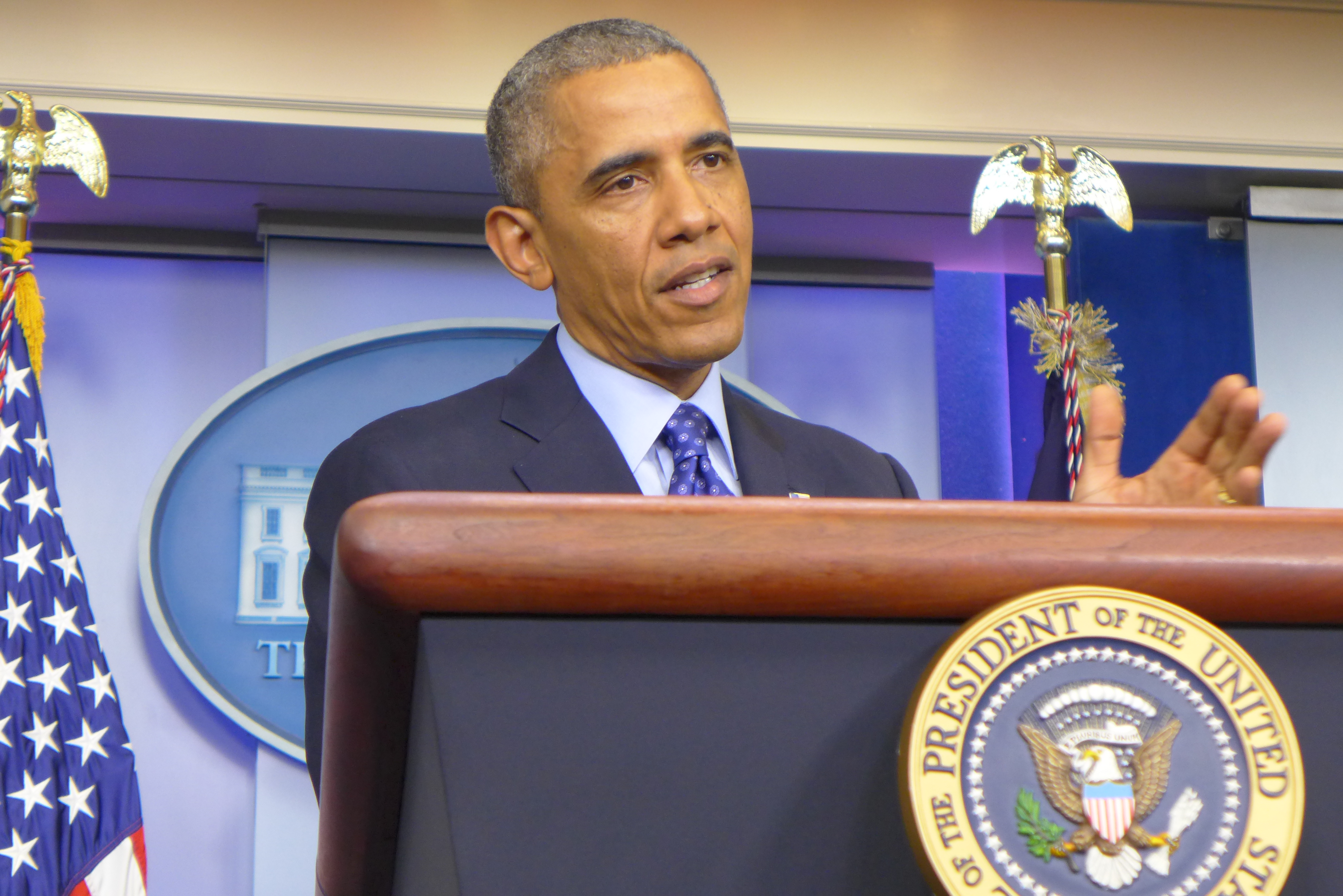 President Obama said Thursday that the United States will not send troops back into combat in Iraq, but said he and his national security team are preparing to take further action if necessary.

"Going forward we will be prepared to take targeted and precise military action if and when we determine that the situation on the ground requires it," Mr. Obama said. "American forces will not be returning to combat in Iraq but we will help Iraqis as they take the fight to terrorists who threaten the Iraqi people, the region, and American interests as well."

The president also announced that he will be sending up to 300 military advisers to assist Iraqi security forces. He noted that the "best and most effective response" to the insurgents threatening Iraqi security will be a partnership with local Iraqi forces.

The president also said he has directed his team to "significantly" increase intelligence, surveillance and reconnaissance assets to give the U.S. a better picture of what is happening inside the country, and he has worked to secure U.S. embassy and other personnel operating inside of Iraq.

Earlier this week, the president ordered 270 troops to Iraq to secure the American embassy. 170 are in Baghdad with another 100 staging outside the country.

Mr. Obama's announcement comes after a Thursday morning meeting with his national security team and on the heels of a meeting with the top four leaders in Congress Wednesday evening, where he indicated he does not need additional congressional authorization for action in Iraq, according to Senate Minority Leader Mitch McConnell, R-Ky.

The president stressed the "urgent" need for a more inclusive political process in Iraq and said he will be dispatching Secretary of State John Kerry to the Middle East and Europe for meetings with U.S. allies and partners.

"Iraqi leaders must rise above their differences and come together around a political plan for Iraq's future. Shia, Sunni, Kurds, all Iraqis must have confidence that they can advance their interests and aspirations through the political process rather than through violence," the president said.

At a separate press conference, Kerry seconded the need for Iraq to begin the process of forming a new government as soon as possible.

"The only way to fight [ISIS] is through strong coordination by Iraqi leaders across the full spectrum of Iraqi society and with the support of the surrounding nations," he said.

While he said that the U.S. should not be choosing Iraq's leaders, he sent an indirect warning to Iraqi Prime Minister Nouri al-Maliki, saying, "only leaders who are able to govern with an inclusive agenda are going to be truly bring the Iraqi people together and help them through this crisis."

The U.S. will not pursue a military option that supports one sect inside Iraq at the expense of another, the president added.

The military advisers being sent to Iraq will have a non-combat role assessing the situation on the ground and advising, training and supporting Iraqi security forces. They will work in teams of about a dozen each and embedded at Iraqi operations centers in and around Baghdad and the areas north of the city, senior administration officials said.

Prior to the announcement, Mr. Obama had only ruled out the possibility of boots on the ground but had asked his national security advisers to prepare a range of other options for him. On Capitol Hill, he faces competing pressure from Democrats who are reluctant to get involved in Iraq again and Republicans who are calling for the use of air strikes to help stop the advance of the Islamic State of Iraq and Syria (ISIS).

U.S. military aircraft, including war planes from the U.S.S. Bush, have already begun flying surveillance missions over Iraq, including Navy P-3s surveillance aircraft based in Bahrain that have been flying over Baghdad, reports CBS News Pentagon correspondent David Martin.

The U.S. is flying manned and unmanned surveillance missions over Iraq around the clock, senior administration officials said.

Joint Chiefs of Staff Chairman Gen. Martin Dempsey told Congress this week that Iraq has asked for air strikes against the insurgents who now control much of Northern and Western Iraq.

So far, Dempsey said, the insurgents and Iraqi troops are "intermingled," making air strikes difficult. The U.S. is still attempting to close intelligence gaps before taking military or covert action. The Pentagon is now planning to send about 100 Army Green Berets to Iraq to serve as American eyes and ears on the ground, Martin reports -- that would not go into battle alongside Iraqi troops.

Republicans have been vocally critical of Mr. Obama for not leaving a troop presence behind in Iraq when the war concluded in 2011. The president rejected the suggestion that he could have acted otherwise, saying it was a decision "made by the Iraqi government" because they refused to grant immunity to American troops.

Despite that, Mr. Obama said, the U.S. has continued to to provide advice and support to the Iraqi government over the last several years and has urged them to embrace a multi-sectarian government.

He has remained insistent throughout the crisis that Iraq must take the lead in providing its own security, even though the U.S. does not want to see it descend into civil war.

"American troops are not going to be fighting in Iraq again. We do not have the ability to simply solve this problem by sending in tens of thousands of troops and committing the kinds of blood and treasure that has already been expended in Iraq. Ultimately this is something that is going to have to be solved by the Iraqis," Mr. Obama said.

He also addressed the issue of whether Iran might aid the Iraqi government in defeating ISIS by saying that the neighboring Shia country "can play a constructive role if it is helping to send the same message to the Iraqi government that we're sending, which is that Iraq only holds together if it's inclusive and that if the interests of Sunni, Shia and Kurd are all respected."

Mr. Obama said he will have to wait and see which path Iran chooses if the Iranians are solely looking to act as armed support on behalf of Shia Iraqis, the president said it would likely worsen the situation and the prospect for Iraq to form a new government.

Although the Deputy Secretary of State William Burns and Iranian Foreign Minister Zarif discussed Iraq on the sidelines of Iranian nuclear talks earlier this week there are no plans for Kerry to engage the Iranians during his trip, senior administration officials said.