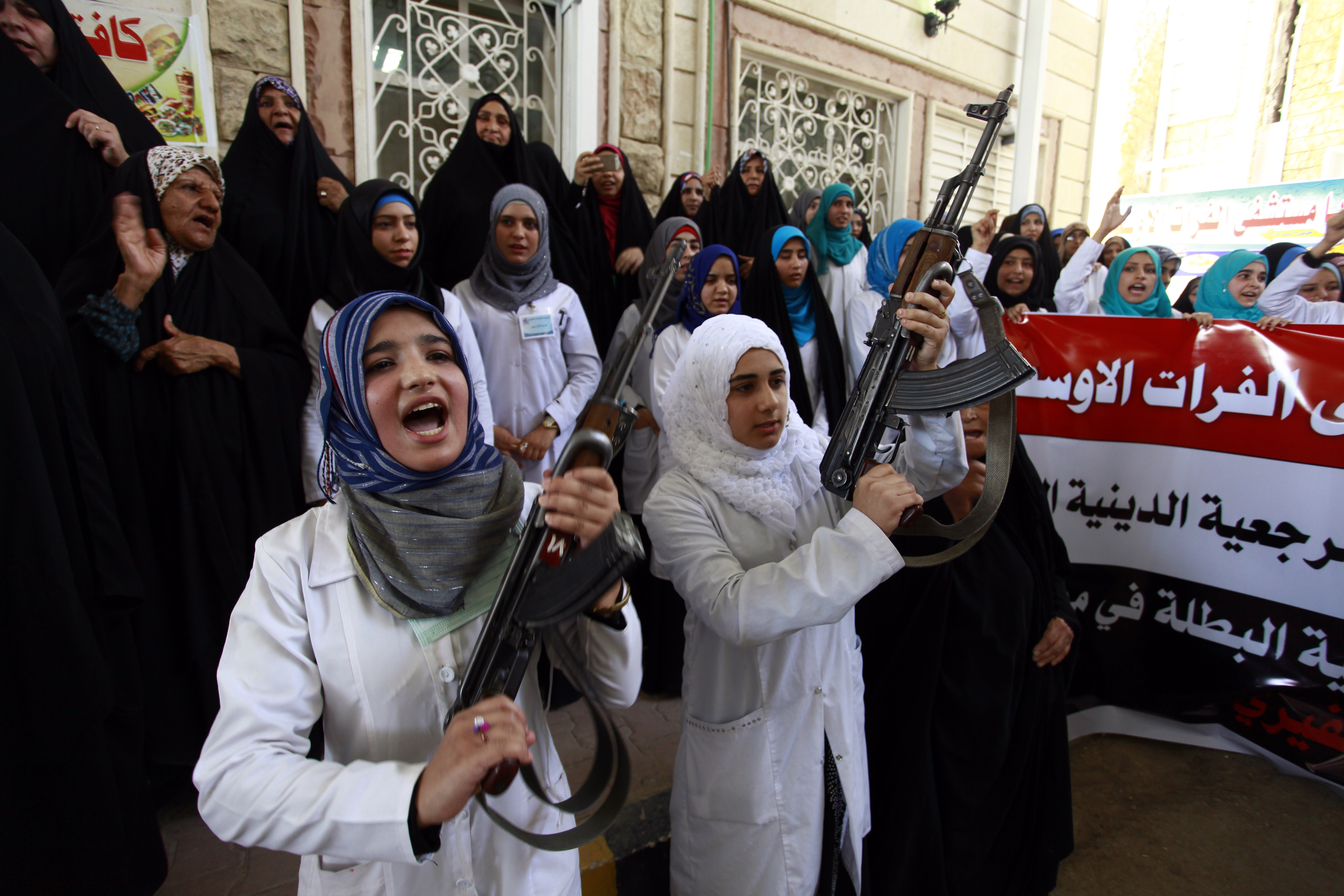 WASHINGTON -- The CIA and other spy agencies are scrambling to close intelligence gaps as they seek ways to support possible military or covert action against the leaders of the al Qaeda-inspired militant group that has seized parts of Iraq and threatens Baghdad's government.

The Pentagon is also planning to send about 100 Army Green Berets into Iraq to serve as American eyes and ears on the ground, Martin reports. Those Green Berets wouldn't go into battle alongside Iraqi troops, but they would be armed and as one military officer put it, "there will be risk."

The lack of clear intelligence appears to have shifted President Barack Obama's immediate focus away from airstrikes in Iraq because officials said there are few obvious targets.

One argument against granting the Iraqi request for airstrikes, which Joint Chiefs Chairman Gen. Martin Dempsey disclosed at a Senate hearing Wednesday, is the lack of good enough intelligence to target insurgents without harming Iraqi troops or innocent civilians.

"These forces are very much intermingled. It's not as easy as looking at an iPhone video of a convoy and immediately striking it," Dempsey said.

However, officials told the Associated Press that no final decisions had been made and suggested Obama ultimately could approve strikes if strong targets do become available.

The president planned to brief top congressional leaders on the matter at the White House on Wednesday, making the case for sending the first American troops into Iraq since the withdrawal at the end of 2011.

As the U.S. intensifies its intelligence collection efforts, officials are confronting a diminished spying capacity in the Middle East, where the 2011 departure of U.S. troops and the outbreak of civil war in Syria left large swaths of both countries largely off-limits to American operatives.

U.S. intelligence analysts are working to track the movements of key figures in the militant group known as the Islamic State of Iraq and Syria (ISIS), which seized Mosul, Tikrit and other towns in Iraq as the country's military melted away. They are sifting through data provided by Jordanian, Saudi, Turkish and other intelligence services, as well as their own human sources, satellites, drones and communications intercepts by the National Security Agency, U.S. intelligence officials say. The officials would not be quoted by name because they were not authorized to discuss the classified details publicly.

The Obama administration has discussed the possibility of launching targeted airstrikes, either with drones or manned aircrafts, to try to blunt the momentum of the fast-moving Sunni insurgency. Other options under consideration include deploying a small contingent of U.S. special operations forces to help train the Iraqi military and boosting intelligence available to the Iraqis.

More broadly, the Obama administration is also pressing for Iraqi Prime Minister Nouri al-Maliki to take steps to make his Shiite-dominated government more inclusive. Obama said last week that any short-term U.S. military actions in Iraq would not be successful unless they were accompanied by political changes by the government in Baghdad.

It's unclear whether the CIA and the NSA have been able to locate the top insurgent figures, such as Abu Bakr al-Baghdadi, the ISIS leader. Baghdadi, who was released in 2009 after spending four years in U.S. military custody in southern Iraq, came away with an appreciation of American monitoring technology that made him an elusive target once he took command, said Richard Zahner, a retired Army general and former senior NSA official.

But intelligence agencies have been tracking the ISIS for years, officials say, watching closely as it grew stronger in the Syrian civil war and began to challenge the Shiite-dominated Baghdad government.

"We have had a real interest, along with our friends the Jordanians, the Turks and others, in doing all we could to watch these guys," said Rep. Jim Himes, a Connecticut Democrat on the House Intelligence Committee. "We have a reasonable sense for the nature of ISIS, but we have very limited visibility into who is doing what to whom right now."

The CIA and other agencies are assembling detailed dossiers known as "targeting packages" that amount to profiles of insurgent commanders, including as much day-to-day information as can be gathered about their location, movements, associates and communications. Those packages can be used to target the subjects for drone strikes or other military action, though they also can be used for nonlethal purposes, current and former officials say.

More than a year ago, the CIA's Counterterrorism Center expanded a team of officers at the agency's headquarters in northern Virginia to track and target al-Qaida-linked militants operating in Syria and Iraq. Those efforts are now intensifying, U.S. officials say. They would not discuss in detail their efforts to monitor the Iraqi insurgents for fear of tipping them off. Already, they said, key leaders communicate through couriers and take other steps to avoid eavesdropping.

Despite challenges, intelligence agencies know "quite a bit" about the current organization and its leadership, said a senior U.S. intelligence official, expressing a widely held view within the CIA and other agencies.

One hurdle is that much of the intelligence network the U.S. built up during eight years of fighting in Iraq has been dismantled, including a network of CIA and Pentagon sources and an NSA system that U.S. officials said made available the details of every Iraqi insurgent email, text message and phone-location signals in real time. Some monitoring is still possible, Zahner said.

The spy agencies appear to have been surprised by the sudden move by the ISIS to seize Mosul and other cities. The Senate Intelligence Committee is reviewing data from the past six months to determine what various agencies knew and said about the possibility of a major offensive, according to a committee staffer who was not authorized to be quoted.

Still, there was some warning. One top official, Lt. Gen Mike Flynn of the Defense Intelligence Agency, predicted to Congress in February that the ISIS "probably will attempt to take territory in Iraq and Syria to exhibit its strength in 2014, as demonstrated recently in Ramadi and Fallujah, and the group's ability to concurrently maintain multiple safe havens in Syria."

Fueling that analysis, he said, was the fact that some Sunni tribes and nationalist groups were working with the ISIS to oppose a Baghdad government they viewed as oppressive.

Behind the scenes, intelligence analysts warned about the increasing difficulties Iraq's security forces faced in combating the ISIS, and the political strains that were contributing to Iraq's declining stability, a senior intelligence official said. They reported on the ISIS's efforts to spark uprisings in areas with substantial Sunni populations and how the Iraqi military's failure to counter ISIS gains in Mosul allowed the group to deepen its influence there, the official said.

Some observers have urged an air campaign that they believe could effectively dislodge the ISIS from the towns it has seized.

"It would be challenging but certainly doable," said David Deptula, who retired in 2010 as the top Air Force general for intelligence and who planned the bombing campaign in the first Gulf War.