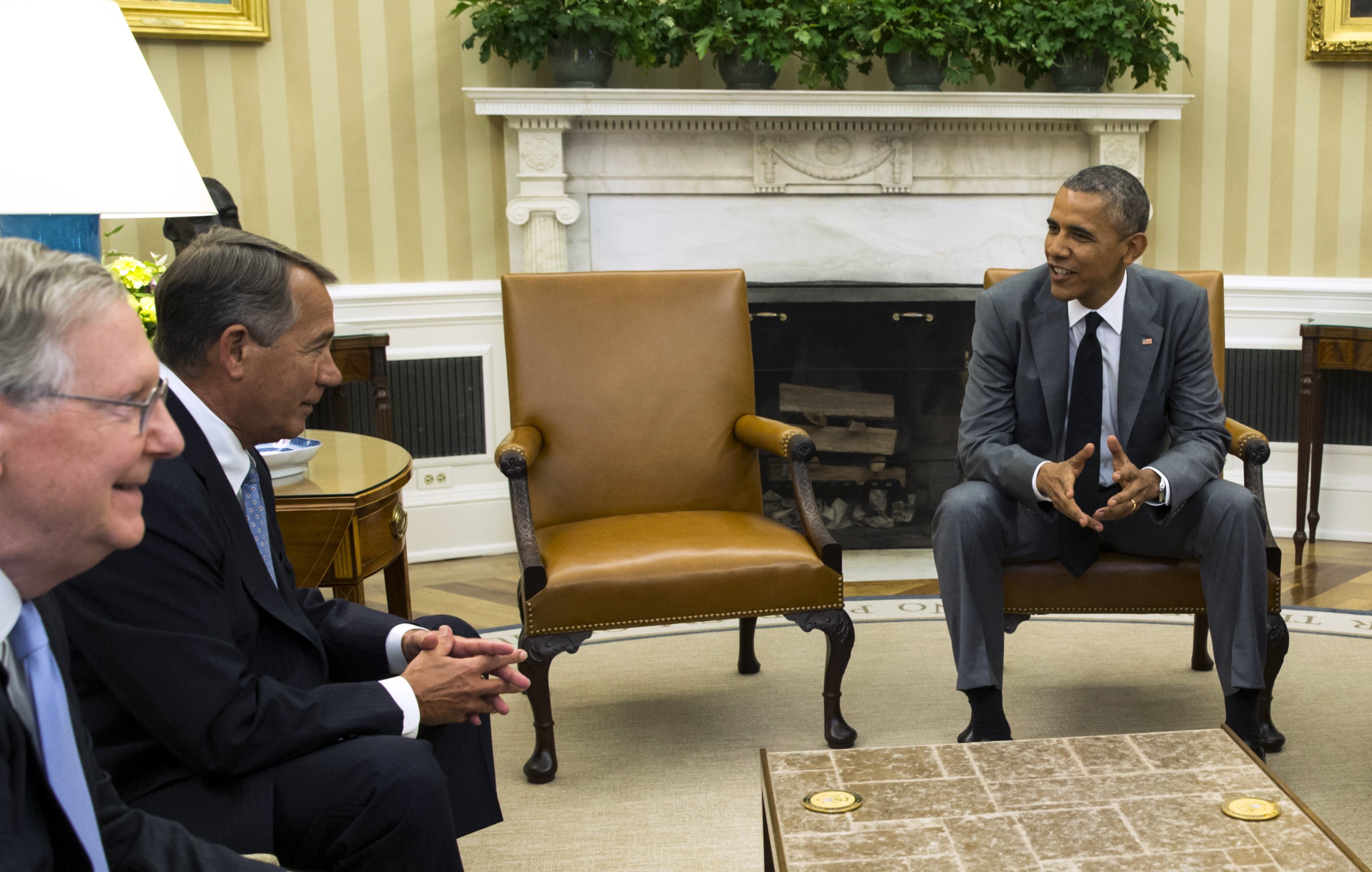 Not waiting for President Obama to announce a U.S. response to the growing violence in Iraq, Republicans stepped up their criticism Thursday charging that Mr. Obama had weakened national security.

"I believe that his attitude has left America weaker and will leave substantial problems to his successor," Senate Minority Leader Mitch McConnell, R-Ky., said on the Senate floor. "We have a duty to help maintain an international order and a balance of power, not out of altruism but out of national interest."

The past several days has turned into a game of finger-pointing as former Bush officials have come out of the woodwork to proclaim the supremacy of the previous administration's foreign policy.

The view has not been universally accepted, though. Fox News anchor Megan Kelly took former Vice President Dick Cheney to task for an op-ed that he and his daughter, Liz, wrote that said, "Rarely has a U.S. president been so wrong about so much at the expense of so many."

"Time and time again, history has proven that you got it wrong as well in Iraq, sir," Kelly told the former vice president in an interview Wednesday.

"You said there was no doubt Saddam Hussein had weapons of mass destruction. You said we would be greeted as liberators. You said the insurgency was in its last throes back in 2005, and you said that after our intervention, extremists would have to 'rethink their strategy of jihad," Kelly continued, with Cheney responding that he disagreed with her.

Meanwhile, the president met with members of his national security team Thursday morning and will speak to reporters after the meeting wraps up.

The president's statement follows a meeting with the top four leaders in Congress Wednesday evening. Though the meeting did not appear to yield any decision, McConnell said the president indicated he didn't need any further congressional authority to take action.

House Minority Leader Nancy Pelosi, D-Calif., echoed that assessment Thursday morning, but cautioned reporters that, "I didn't want that to be misinterpreted as any support for boots on the ground."

For all of the Republican calls for quick action in Iraq, the president would likely face resistance from Democrats to any military commitment in the country. He has ruled out putting combat troops back in action, but the White House has stressed that all other options are still on the table.

Rep. Barbara Lee, D-Calif., an anti-war Democrat, told CQ Roll Call Wednesday afternoon that she plans to offer amendments to the Defense Department spending bill that would deny the use of funds for combat operations in Iraq and repeal the 2002 authorization for use of force.

Pelosi called the subject of Lee's amendments "a worthy discussion" but said she was not sure if they would win approval by the House.

Lawmakers and defense officials are divided over whether the U.S. should use its air power to support the Iraq government. Former CIA chief David Petraeus, who commanded the coalition forces in Iraq and is credited with the "surge" strategy that helped calm the sectarian violence during the war, has said there would need to be major improvements in the Iraqi political system that allowed more people to feel enfranchised.

"This cannot be the United States being the air force for Shia militias, or a Shia on Sunni Arab fight," he said at a conference in London, according to The Daily Beast.

While most people are calling for political reform to Iraq's government - if not an all-out leadership change that ousts Prime Minister Nouri al-Maliki - some Republicans are urging the U.S. to move ahead quickly with air strikes to stop the advance of the Islamic State of Iraq and Syria (ISIS), which has already captured several major towns and cities.

"No one that I know wants to send combat troops on the ground but airstrikes are an important factor psychologically and in many other ways," Sen. John McCain, R-Ariz., said on the Senate floor Thursday morning. "We must meet this threat. The president of the United States must make some decision and I am convinced that the national security of the united states of America is at risk here and the sooner all of us realize it, the better we will be."

House Speaker John Boehner, R-Ohio, is one of the top Republicans refraining from offering a specific suggestion about how the U.S. should proceed but has said that any action "needs to be part of an overall strategy not only for Iraq, but for the region, in terms of how do we reduce the number of terrorists that are out there hurting Americans abroad, hurting our assets abroad and frankly building safe havens to organize and attack Americans here. This is a very serious problem."

"The White House has known for months about the situation in Iraq, and when you look its not just Iraq. It's Libya. It's Egypt. It's Syria. The spread of terrorism has increased exponentially under this president's leadership," Boehner said. "You look at his presidency and you can't help but get the sense that the wheels are coming off."