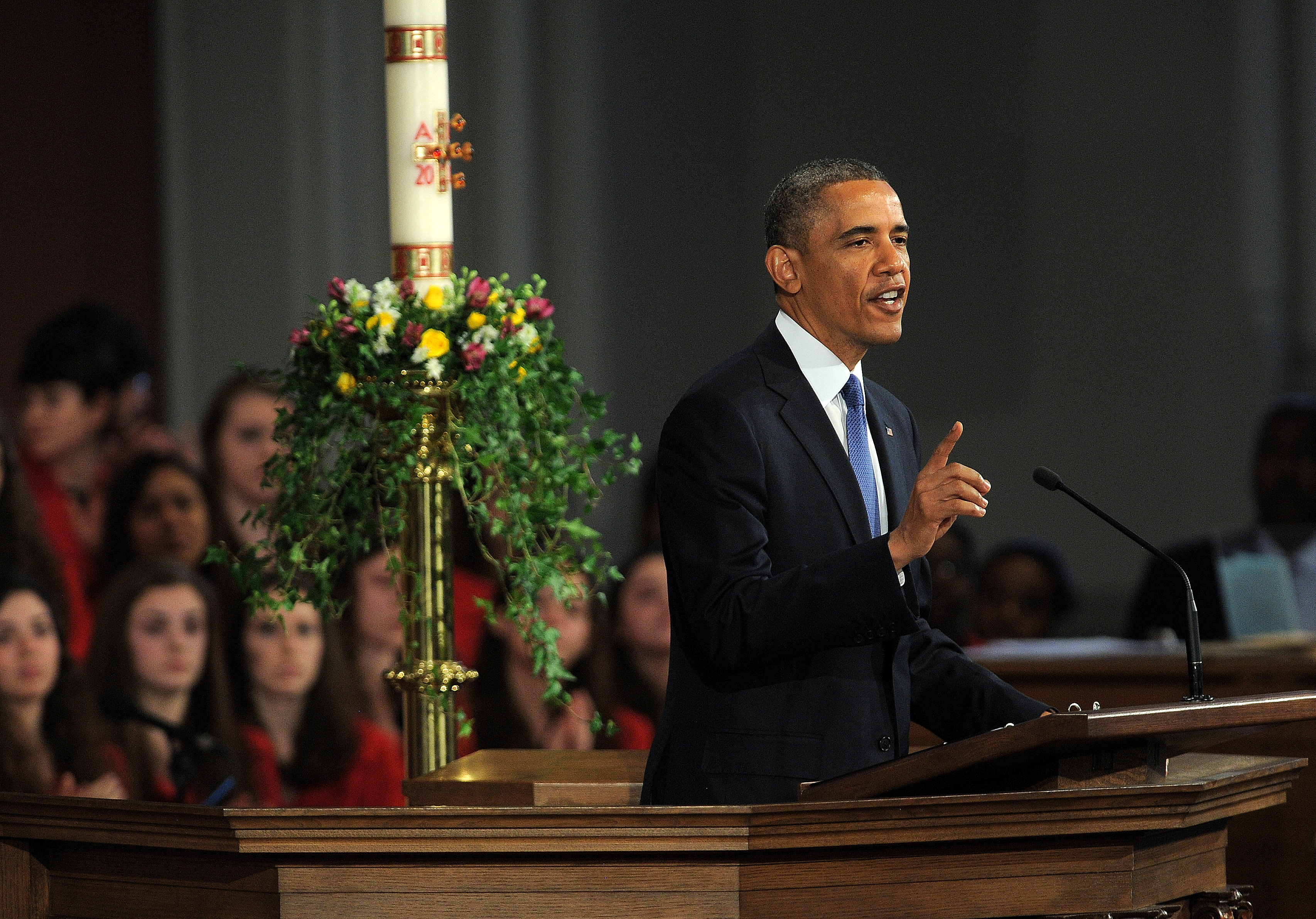 In an emotional speech at an interfaith service honoring the victims of Monday's Boston Marathon bombing, President Obama encouraged the city, and the nation, to show resolve in the face of terrorism.

"You will run again," he said to applause from the grieving attendees. "You will run again, because that's what the people of Boston are made of. Your resolve is the greatest rebuke to whoever committed this heinous act. If they sought to ... terrorize us... it should be pretty clear by now they picked the wrong city to do it."

Mr. Obama opened and closed his remarks -- which he wrote himself, according to a senior White House official -- by quoting Biblical scripture fitting for marathon runners: Scripture tells us to 'run with endurance the race that is set before us,'" Mr. Obama said.

"That's what you've taught us, Boston, that's what you've reminded us -- to push on, to persevere," he continued. "Even when our heart aches, we summon the strength maybe we didn't even know we had, and we carry on... We do that because we know that somewhere around the bend, a stranger has a cup of water. Around the bend, somebody's there to boost our spirits."

Mr. Obama spoke about his personal connection to Boston -- he attended Harvard Law School and delivered the keynote address at the Democratic National Convention in Boston in 2004 -- and he spoke about the reasons why the rest of the globe cherishes Boston as "one of the world's great cities."

"Whether folks come here to Boston for just a day or they stay here for years, they live with a piece of this town tucked firmly into their hearts," he said. "Boston's your home town, but we claim it a little bit, too. I know this because there's a piece of Boston in me."

"We join you in saying, Boston, you're my home," he added. "What happened on Monday is personal. It's personal."

Mr. Obama was one of several political officials in attendance at the service. Boston Mayor Thomas Menino and Gov. Deval Patrick also made remarks at the event, along with Boston's various faith leaders.

Former Gov. Mitt Romney was in attendance at the invitation of Patrick. Secretary of State John Kerry, who served as a senator from Massachusetts for 28 years, could not attend because he had to testify before a Senate committee in Washington on Thursday. However, his wife Teresa Heinz Kerry was in the audience.

Massachusetts' congressional delegation was also in attendance, with most of them traveling from Washington to Boston with Mr. Obama on Air Force One. Vicki Kennedy, wife of the late Sen. Ted Kennedy, D-Mass., also traveled aboard Air Force One.

Before departing from the White House Thursday morning, Mr. Obama was briefed on the latest from the bombing investigation by Lisa Monaco, deputy national security adviser for Homeland Security and Counterterrorism. On Wednesday, the president signed a disaster declaration for the state of Massachusetts, making additional federal resources available to state and local officials.

In addition to speaking at the interfaith service, Mr. Obama on Thursday also met with the families of those injured or killed, as well as the first responders and volunteers who were on the scene.

On the way to Boston, Mr. Obama called Texas Gov. Rick Perry to talk about the West, Texas explosion. The president told the governor his prayers are with the people of West and offered any federal resources needed for the response and recovery effort. Mr. Obama also called the mayor of West, but they were not able to connect at the time.