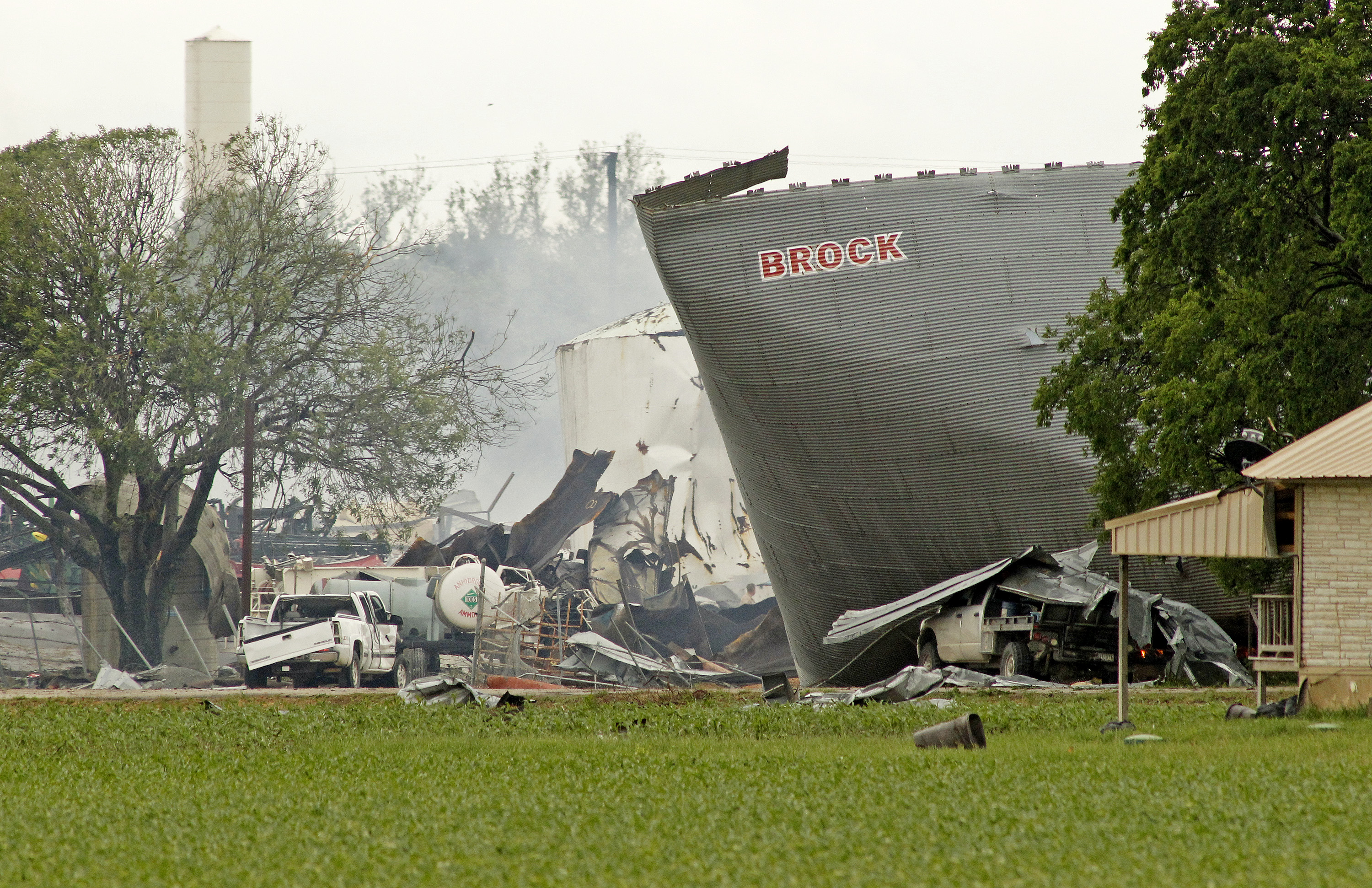 WEST, Texas Rescue workers searched the smoldering ruins of a fertilizer plant Thursday for survivors of a monstrous explosion that leveled homes and businesses in every direction across the Texas prairie.

Initial reports put the number of fatalities as high as 15, but later in the day, authorities backed away from any estimate and refused to elaborate. More than 160 people were hurt, and three to five volunteer firefighters were among those believed to be dead. The mayor of the city said five bodies have so far been recovered.

Daybreak revealed a breathtaking band of destruction extending outward from the West Fertilizer Co. in this small farming community about 20 miles north of Waco. The thunderous blast shook the ground with the strength of a small earthquake and could be heard dozens of miles away.

Several buildings with smashed roofs and leveled walls still were smoking early Thursday. An ATF official told CBS News that that the fire scene is still too hot for officials to start a serious investigation. Some initial responders may be near the site of the explosion, but any real investigation cannot begin until the scene cools.

"They have not gotten to the point of no return where they don't think that there's anybody still alive," Waco Police Sgt. William Patrick Swanton said of rescuers.

On Thursday, Texas Governor Rick Perry hailed the emergency response to what he said was "truly a nightmare scenario" for the community.

Perry said at least 75 homes were damaged in the blast. Lt. Gov. David Dewhurst says the explosion Wednesday night knocked people "all over the town" back 10 feet, including some through windows.

President Obama, while en route to Boston aboard Air Force One, called Perry to tell him that his prayers are with the people of West, Texas as they respond to the explosion, CBS News White House correspondent Major Garrett reports. Mr. Obama offered any federal resources that may be needed to assist in the ongoing response and recovery effort.

The explosion that struck around 8 p.m. sent flames shooting into the night sky and rained burning embers and debris down on shocked and frightened residents. It leveled a four-block area around the plant that a member of the city council, Al Vanek, said was "totally decimated."

There is no indication the blast was anything other than an industrial accident, Swanton said.

The toll included 50 to 75 houses, an apartment complex with about 50 units that one state police officer said was reduced to "a skeleton," a middle school and the West Rest Haven Nursing Home, from which first-responders evacuated 133 patients, some in wheelchairs.

On Thursday people in West were cleaning up their now boarded homes. "Some of my closes friends have had their houses destroyed," April Puckett told Tracy. "And I just -- we're going to try to pull together and recover from this. I mean that's all we can do."

In the hours after the blast, residents wandered the dark, windy streets searching for shelter. Among them was Julie Zahirniako, who said she and her son, Anthony, had been playing at a school playground near the fertilizer plant when the explosion hit. She was walking the track, he was kicking a football.

The explosion threw her son four feet in the air, breaking his ribs. She said she saw people running from the nursing home and the roof of the school lifted into the sky.

"The fire was so high," Zahirniako said. "It was just as loud as it could be. The ground and everything was shaking."

William Burch and his wife, a retired Air Force nurse, entered the damaged nursing home before first responders arrived. They split up, searching separate wings, and found residents in wheelchairs trapped in their rooms. The halls were dark and the ceilings had collapsed. Water filled the hallways and electrical wires hung eerily from the ceilings.

"They had Sheetrock that was on top of them. You had to remove that," Burch said. It was "completely chaotic."

Some witnesses compared the scene to the 1995 Oklahoma City bombing, and authorities said the plant made materials similar to that used to fuel the bomb that tore apart that city's Murrah Federal Building.

Although authorities said it will be some time before they know how many lives were lost, they put the number of those injured at more than 160 early Thursday. West Mayor Tommy Muska told reporters that his city of about 2,800 people needs "your prayers."

"We've got a lot of people who are hurt, and there's a lot of people, I'm sure, who aren't gonna be here tomorrow," Muska said. "We're gonna search for everybody. We're gonna make sure everybody's accounted for. That's the most important thing right now."

At the Hillcrest Baptist Medical Hospital in Waco, elderly people were wheeled in on stretchers. A man in a wheelchair with his T-shirt covered in blood winced as medical professionals tended to wounds on his head and left arm.

The town's volunteer firefighters had responded to a call at the plant at 7:29 p.m., Swanton said. Due to the plant's chemical stockpile, "they realized the seriousness of what they had," he said.

Muska was among the firefighters, and he and his colleagues were working to evacuate the area around the plant when the blast followed about 20 minutes later.

Dozens of emergency vehicles amassed at the scene in the hours after the blast. Firefighters used flashlights to search the still-burning skeleton of an apartment complex that was all but destroyed. All that remained of a nearby house was the fireplace and chimney, standing tall among smoldering embers of what was once someone's home. Smoke filled the air.

A flood-lit football field initially was used as a staging area, then other triage centers sprung up around the blast site. At one, an army of first responders evaluated senior citizens, many of whom were disoriented, dazed and panicked.

"Get them into an ambulance now," workers shouted.

Those who were OK were loaded onto school buses, many in wheelchairs, to be taken to evacuation centers.

About 100 of the injured were treated at Hillcrest Baptist Medical Center in Waco, where five people were in intensive care. Another 65 were taken to Providence Health Center in Waco. Officials said the injuries included broken bones, bruises, lacerations, respiratory distress, and some head injuries and minor burns.

The U.S. Chemical Safety Board said it was deploying a large investigation team to West. An Alcohol, Tobacco and Firearms national response team that investigates all large fires and explosions also was coming in, bringing fire investigators, certified explosives specialists, chemists, canines and forensic specialists. But entry to the blast site wasn't expected until later. "It's still too hot to get in there," said Franceska Perot, an ATF spokesperson.

The Dallas Morning News reports that documents show West Fertilizer told the Environmental Protection Agency that it presented no risk of fire or explosion, despite having 54,000 pounds of anhydrous ammonia.

According to the newspaper, an emergency planning report shows West Fertilizer stated "no" under the section asking about fire or explosion risks. The fertilizer plant indicated the worst case scenario would be a 10-minute release of ammonia gas that would not harm anyone.

There were no immediate details available from police on the number of people who work at the plant, which was cited by the Texas Commission on Environmental Quality in 2006 for failing to obtain or to qualify for a permit. The agency acted after receiving a complaint in June of that year of a strong ammonia smell.

In 2001, an explosion at a chemical and fertilizer plant killed 31 people and injured more than 2,000 in Toulouse, France. The blast occurred in a hangar containing 300 tons of ammonium nitrate, which can be used for both fertilizer and explosives. The explosion came 10 days after the Sept. 11, 2001, terrorist attacks in the U.S., and raised fears at the time it was linked. A 2006 report blamed the blast on negligence.