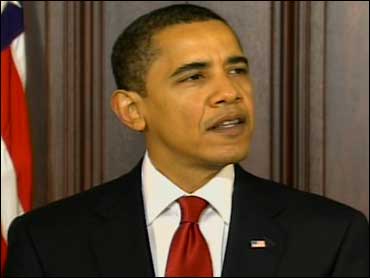 President Barack Obama says he hopes U.S. troops can identify moderate elements of the Taliban and move them toward reconciliation.

Asked in an interview with The New York Times if the United States is winning in Afghanistan, Obama said "no," while adding "our troops are doing an extraordinary job in a very difficult situation."

"But you've seen conditions deteriorate over the last couple of years. The Taliban is bolder than it was. I think ... in the southern regions of the country, you're seeing them attack in ways that we have not seen previously," Obama said in the interview, which was posted Saturday on the Times' Web site.

"The national government still has not gained the confidence of the Afghan people," he said. "And so it's going to be critical for us to not only, get through these national elections to stabilize the security situation, but we've got to recast our policy so that our military, diplomatic and development goals are all aligned to ensure that al Qaeda and extremists that would do us harm don't have the kinds of safe havens that allow them to operate."

There may be opportunities to reach out to moderates in the Taliban, but the situation in Afghanistan is more complicated than the challenges the American military faced in Iraq, Obama said.

U.S. troops were able to persuade Sunni Muslim insurgents in Iraq to cooperate in some instances because they had been alienated by the tactics of al Qaeda terrorists.

Obama cautioned that Afghanistan is a less-governed region with a history of fierce independence among tribes, creating a tough set of circumstances for the United States to deal with.

The idea of cooperation with some in the Taliban has been talked about for many months by American military commanders including Gen. David Petraeus, head of U.S. Central Command.

"If you talk to Gen. Petraeus, I think he would argue that part of the success in Iraq involved reaching out to people that we would consider to be Islamic fundamentalists, but who were willing to work with us," said Obama.

"There may be some comparable opportunities in Afghanistan and the Pakistani region, but the situation in Afghanistan is, if anything, more complex," Obama added.

Last month, Defense Secretary Robert Gates said that Washington could accept a political agreement between the Afghan government and the Taliban if the insurgents will lay down their arms and accept the government's terms.

At the same time, Obama left open the possibility that U.S. operatives might capture terror suspects abroad without the cooperation of a country where they were found.

"There could be situations - and I emphasize 'could be' because we haven't made a determination yet - where, let's say that we have a well-known al Qaeda operative that doesn't surface very often, appears in a third country with whom we don't have an extradition relationship or would not be willing to prosecute, but we think is a very dangerous person," he said.

Obama added that the U.S. doesn't torture its suspects and noted in some cases those being held would have an opportunity to challenge their detention in federal courts.