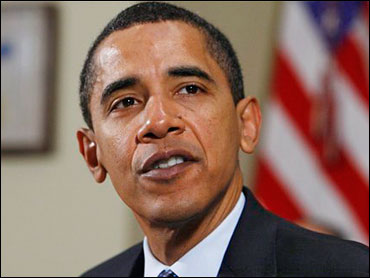 (AP Photo/Charles Dharapak)
Before meeting privately with Republican and Democratic Congressional leaders about the economic situation this morning, President Obama discussed the importance of quickly passing his economic stimulus plan – despite "some differences around the table and between the administration and members of Congress about particular details on the plan."

"I know that it is a heavy lift to do something as substantial as we're doing right now," said Mr. Obama. "...But what I think unifies this group is a recognition that we are experiencing a unprecedented, perhaps, economic crisis that has to be dealt with, and dealt with rapidly."

The news on the economy, on which he is being briefed daily, "has not been good," the president said. He suggested, however, that the administration and Congress are "right on target" to pass his plan, which he says will create 3 to 4 million jobs, by President's Day weekend.

The president also addressed concerns about how the money in the stimulus plan will be spent, noting "some of the reports that we've seen over the last couple of days about companies that have received taxpayer assistance, then going out and renovating bathrooms or offices, or in other ways not managing those dollars appropriately."

Mr. Obama was critical of "the lack of accountability and transparency in how we are managing some of these programs to stabilize the financial system." He said these issues must be addressed "if we're going to be responsible in dealing with this economic crisis."

Republicans have chafed at some aspects Mr. Obama's plan. They have called for more tax cuts, expressed concerns about the bill's $825 billion cost and suggested the bill's job creation projections may be overly optimistic.

Speaking of proposals from House Republicans to address the ailing economy, House minority leader John Boehner said, "Our proposals are rooted in the belief that fast-acting tax relief, rather than slow-moving and wasteful government spending, is the most effective way to create jobs and put our economy back on track."