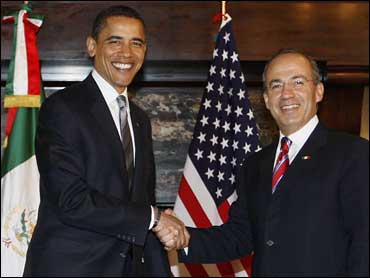 (AP)
President Obama said he would consider deploying National Guard troops to control violence along the US-Mexico border during an interview Wednesday.

McClatchy reports that the president said, "We're going to examine whether and if National Guard deployments would make sense and under what circumstances they would make sense."

"I don't have a particular tipping point in mind," he continued. "I think it's unacceptable if you've got drug gangs crossing our borders and killing U.S. citizens."

The potential deployment comes amid reports that approximately 1,000 people have been killed along the contentious border in the first three months of 2009. Increased violence in northern Mexican towns has been attributed to battles that have broken out following Mexican President Felipe Calderon order of a crackdown on drug cartels.

President Obama told reporters that the violence is "really a two-way situation" necessitating a cooperative approach.

"The drugs are coming north, we're sending funds and guns south," he said. "As a consequence, these cartels have gained extraordinary power. Our expectation is to have a comprehensive policy in place in the next few months."