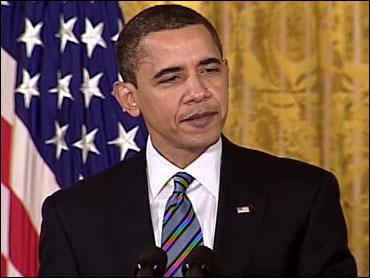 "This isn't just a matter of dollars and cents. It's about our fundamental values," Mr. Obama said at the beginning of a speech at the White House on lending to small business owners.

Mr. Obama said that AIG is in trouble due to "recklessness and greed."

"Under these circumstances, it's hard to understand how derivative traders at AIG warranted any bonuses, much less $165 million in extra pay," he added. "How do they justify this outrage to the taxpayers who are keeping the company afloat?"

The president also called for Congress to take up regulatory reform of financial institutions "so we don't find ourselves in this position again."

$90B Of AIG's Federal Rescue Went To Banks

Here are Mr. Obama's full remarks on AIG, as prepared for delivery and released by the White House:

Updated: Here are Mr. Obama's full remarks on AIG, as delivered and released by the White House:

Now before I talk about the new steps we're taking to get credit flowing to small businesses across our country, I do want to comment on the news about executive bonuses at AIG. I think some of you have heard a little bit about this over the last few days. This is a corporation that finds itself in financial distress due to recklessness and greed. Under these circumstances, it's hard to understand how derivative traders at AIG warranted any bonuses, much less $165 million in extra pay. I mean, how do they justify this outrage to the taxpayers who are keeping the company afloat?

In the last six months, AIG has received substantial sums from the U.S. Treasury. And I've asked Secretary Geithner to use that leverage and pursue every single legal avenue to block these bonuses and make the American taxpayers whole. (Applause.) I want everybody to be clear that Secretary Geithner has been on the case. He's working to resolve this matter with the new CEO, Edward Liddy -- who, by the way, everybody needs to understand came on board after the contracts that led to these bonuses were agreed to last year.

But I think Mr. Liddy and certainly everybody involved needs to understand this is not just a matter of dollars and cents. It's about our fundamental values. All across the country, there are people who are working hard and meeting their responsibilities every day, without the benefit of government bailouts or multi-million dollar bonuses. You've got a bunch of small business people here who are struggling just to keep their credit line open -- that they are foregoing pay, as one of our entrepreneurs talked about, they are in some cases mortgaging their homes, and doing a whole host of things just in order to keep things afloat. All they ask is that everyone, from Main Street to Wall Street to Washington, play by the same rules. And that is an ethic that we have to demand.

And what this situation also underscores is the need for overall financial regulatory reform, so we don't find ourselves in this position again, and for some form of resolution mechanism in dealing with troubled financial institutions, so that we've got greater authority to protect American taxpayers and our financial system in cases such as this.

Now, we already have resolution authority -- excuse me, I'm choked up with anger here -- (laughter) -- we always -- already have some of that resolution authority when it comes to a traditional bank. But when you start getting into AIGs and some of these other operations that have a whole bunch of different financial instruments, then we don't have all the regulatory power that we need. And this is something that I expect to work with Congress to deal with in the weeks and months to come.

Are We Taxpayers – Or Suckers?