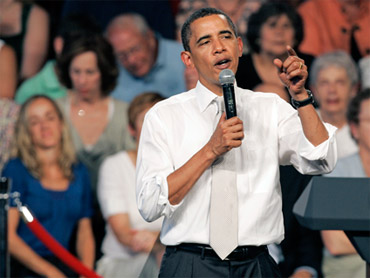 President Obama wants the final negotiations on health care reform - a reconciliation of the House and Senate versions of the bill - put on a fast track, even if that means breaking an explicit campaign promise.

"The House and Senate plan to put together the final health care reform bill behind closed doors according to an agreement by top Democrats," House Speaker Nanci Pelosi said today at the White House.

The White House is on board with that, too, reports CBS News political correspondent Chip Reid. Press Secretary Robert Gibbs stressed today that "the president wants to get a bill to his desk as quickly as possible."

During the campaign, though, candidate Obama regularly promised something different - to broadcast all such negotiations on C-SPAN, putting the entire process of pounding out health care reform out in the open. (That promise applied to the now-completed processing of forging House and Senate bills, too.)

Back when Republicans controlled Congress and George W. Bush was in the White House, it was Democrats who angrily complained about secret backroom deals.

Now the roles are reversed.

"The negotiations are obviously being done in secret and the American people really just want to know what they are trying to hide," said Rep. Tom Price, R-Ga.

Even so, top Democrats in both houses say they hope to have the final bill ready for the president's signature in time for his State of the Union address - less than four weeks from now.