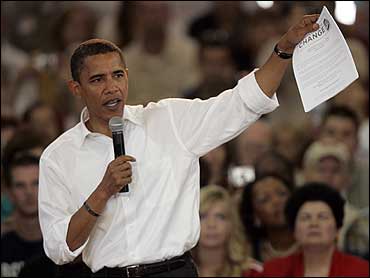 Barack Obama made his first direct criticism of Republican vice presidential nominee Sarah Palin on Saturday, saying she pretends to oppose spending earmarks when she actually has embraced them.

Speaking to 800 people at the Wabash Valley Fairgrounds in Terre Haute, Ind., the Democratic presidential nominee ridiculed John McCain and his running mate, the Alaska governor, for describing themselves as agents of change at this week's GOP convention.

"Don't be fooled," Obama told the crowd surrounding him in a large barn. "John McCain's party, with the help of John McCain, has been in charge" for nearly eight years.

"I know the governor of Alaska has been saying she's change, and that's great," Obama said. "She's a skillful politician. But, you know, when you've been taking all these earmarks when it's convenient, and then suddenly you're the champion anti-earmark person, that's not change. Come on! I mean, words mean something, you can't just make stuff up."

McCain has vowed to wipe out earmarks, which are targeted funding for specific projects that lawmakers put into spending bills. As governor, Palin originally supported earmarks for a controversial $398 million Alaska project dubbed the "bridge to nowhere." But she dropped her support after the state's likely share of the cost rose. She hung onto $27 million to build the approach road to the bridge.

Under Palin's leadership, Alaska this year asked for almost $300 per person in requests for pet projects from one of McCain's top adversaries: indicted Sen. Ted Stevens. That's more than any other state received, per person, from Congress for the current budget year. Other states got just $34 worth of local projects per person this year, on average, according to Citizens Against Government Waste, a Washington-based watchdog group.The state government's earmark requests to Congress in her first year in office exceeded $550 million, more than $800 per resident. Palin actually reduced the state government's requests for special projects this year in the wake of President Bush's demand for a cutback in earmarks.

Alaska also has become so accustomed to largess flowing from Congress through Stevens that most of Palin's earmark requests this year - such as studies of Alaskan fisheries, grants to combat drug trafficking, and rural airport upgrades - simply keep ongoing programs going. Among her requests was $150,000 to pay the travel bills of state and fisheries industry representatives on the boards that implement North Pacific fisheries agreements.

Until Saturday, Obama had refrained from criticizing Palin directly, saying only that she, like McCain, would continue the Bush administration's policies.

Democrats have debated how to deal with Palin. They want to avoid charges of sexism but find ways to highlight what they see as her political weaknesses.

Obama delivered some of his most withering criticisms yet of McCain, although he did so with chuckles and an air of mock disbelief. McCain has acknowledged voting with President Bush 90 percent of the time in Congress, Obama said.

"I mean, come on, they must think you're stupid," Obama said as the crowd laughed and cheered.

The McCain campaign noted that Obama has steered numerous earmarks to his state of Illinois. However, Obama has not been the critic of earmarks that McCain and, more recently Palin, have been.

Obama said Republicans are targeting his character, and he criticized McCain for saying he would reduce the partisan rancor in Washington. Pretending to address McCain, he said, "Did you pay attention to the last two days of your convention? Were you not watching?"