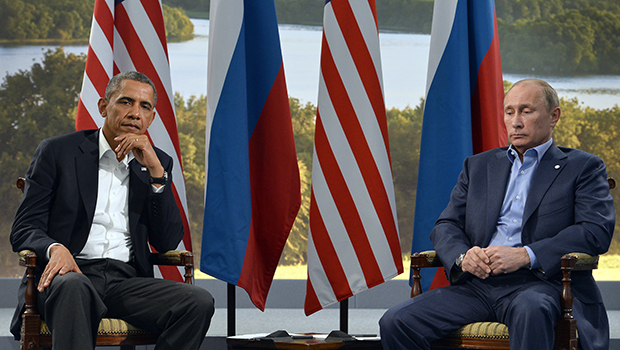 ST. PETERSBURG, Russia The Group of 20 summit kicking off Thursday on the Russian shores of the Baltic sea will bring the two men at the forefront of the geopolitical standoff over Syria's civil war into the same room for meetings: President Obama and his Russian counterpart, President Vladimir Putin.

As they arrive in St. Petersburg for two days of meetings, Mr. Obama and French President Francois Hollande are preparing for possible military strikes over what they insist was a chemical weapons attack by Syrian President Bashar Assad's army in the suburbs of Damascus on Aug. 21.

Both presidents are effectively waiting, however, for the U.S. Congress to weigh in first, so bombs are unlikely to fall on Syrian government targets during the gathering in Russia. President Obama's objective of backing from Congress came one step closer to reality on Wednesday with the Senate Foreign Relations Committee narrowly approving the use of U.S. military force in Syria.

In the meantime, Presidents Obama and Hollande are likely to continue lobbying other world leaders at the summit to accept their alleged evidence that Assad's regime was behind the deadly attack on the eastern Ghouta suburbs, which the White House says killed more than 1,400 people.

G-20 host President Putin, however, is a staunch ally of President Assad's regime, and he'll be wielding his own evidence to convince the other heads of state in St. Petersburg that the U.S. and French governments are rushing into military action without solid proof of who was behind the chemical attack.

On his own turf and looking strong in the face of Western hesitancy to tangle militarily with Assad and his Russian backers, Putin said this week that any one-sided action would be rash. But he said he doesn't exclude supporting U.N. action — if it's proven that the Syrian government used poison gas on its own people.

President Obama said Wednesday during a one-day stopover in Sweden that armed groups fighting against Assad in Syria simply do "not have the capability" to have carried out the Ghouta attack.

"These weapons are in Assad's possession, we have intercepts of people in the regime before and after the attack acknowledging it, we can show rockets going from Assad controlled areas into rebel territory with the weapons," asserted Mr. Obama.

But if the White House has already shown that evidence to its partners in the United Nations Security Council -- including, most crucially, the veto-wielding members Russia and China -- it has failed to convince the vast majority of them of its veracity.

Heading into St. Petersburg, the only nation to say it will join in a military intervention not sanctioned by the Security Council is France.

Russia's Foreign Ministry, meanwhile, has reportedly handed its own 100-page report to the United Nations on a previous alleged chemical weapons attack in Syria. Russia said in July that tests conducted by Russian scientists on samples from the northern town of Khan al-Assal following an alleged March 19 chemical attack showed that rebel fighters were most likely to blame.

According to information posted this week to the Foreign Ministry's website, tests carried out by the Russian scientists on samples from Khan al-Assal showed the missile used to deliver the chemical agent was "not a regular munition of the Syrian army," but rather a "artisan-type" device which they concluded was likely built by the rebels. The report also says the explosives used in the projectile, and the chemical agents themselves, were not typical of the materials used by militaries in such weapons.

According to the Foreign ministry website, the nerve agents found in soil samples at Khan al-Assal, which it said named as sarin and diisopropyl fluorophosphate, did not appear to have been concocted in "an industrial environment."

The March 19 attack in Khan al-Assal was one of two alleged chemical attacks that the Obama administration first furtively confirmed -- and pinned "with some degree of varying confidence" on the Assad regime.

Shortly after letters from the White House to U.S. senators leveling that initial charge against the Syrian government were made public in April, Secretary of State John Kerry said on Capitol Hill that there were two instances of chemical weapons use -- the one in Khan al-Assal and another near Damascus.

CBS News correspondent David Martin reported that in both instances U.S. intelligence was basing its assertion at least in part on human tissue or blood samples showing symptoms consistent with sarin gas poisoning, but the samples from Syria had passed through a number of different hands and as a result, American officials had only "low to moderate confidence" in their judgment.

It was not immediately clear how Russia obtained the samples from Khan al-Assal that it used in its investigation into the attack there -- which it carried out upon a request from the Assad regime.

Russia will likely use the contradiction between its own findings from Khan al-Assal and the assertions made by the Obama administration over the same incident to argue its case that no definitive conclusions can yet be drawn on culpability in the Ghouta attack.

The leader of the U.N., joined by the global body's envoy to Syria, will also be in St. Petersburg this week, pushing world leaders to wait for an official report on the attack in Ghouta from a team of U.N. investigators who visited the area just last week before any military action is taken.

According to a statement from the U.N. spokesman released Thursday morning, Secretary-General Ban Ki-moon and envoy Lakhdar Brahimi were going to St. Petersburg to "push even harder for the International Conference on Syria to take place in Geneva," saying "a political solution is the only way to end the bloodshed in Syria."

Brahimi has said that any military action taken without a U.N. Security Council mandate would be in contravention of international law. Russia and China have thus far used their veto power on the Council to block all efforts to impose harsh new sanctions on Syria.