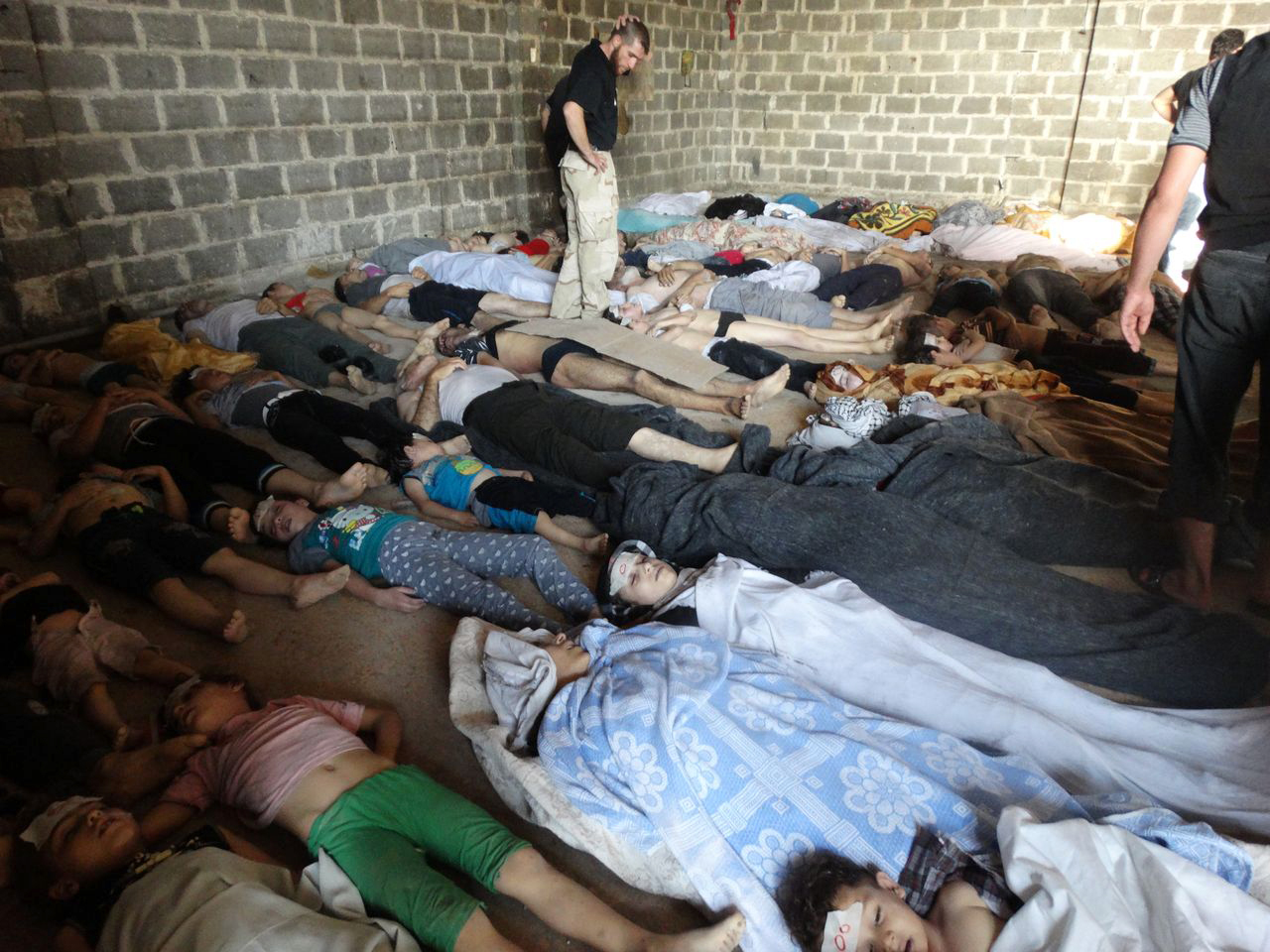 LONDON Prime Minister David Cameron told British lawmakers Thursday that there is "no 100 percent certainty about who is responsible" for the apparent mass-chemical weapons attack on suburban Damascus on Aug. 21.

Nevertheless, Cameron asserted that "from all the evidence we have," his government, along with the Obama administration, had made the "judgment" that "the regime is responsible and should be held to account."

Also just like the Obama administration, however, Cameron's government has yet to explain exactly what the evidence of Assad's culpability is, or where it came from.

The Prime Minister spoke hours after the British Joint Intelligence Organization (JTI) released a report claiming "a limited but growing body of intelligence" showing that Assad's regime was behind the Aug. 21 attacks, which left at least 355 people dead.

"Some of this intelligence is highly sensitive," the chairman of Britain's Joint Intelligence Committee wrote to Cameron in the open report, "but you have had access to it all."

While Cameron has had access to the intelligence, the rest of the world has not. He did offer one further claim in Parliament on Thursday, however, saying there was "intelligence that regime forces took precautions consistent with chemical weapons use" in the immediate prelude to the Ghouta attacks. He did not explain where that information had come from.

About 4,000 miles to the west, in Washington, the Obama administration was putting the finishing touches on two reports -- the first a classified assessment to be presented to members of Congress; the second, a declassified version for the American public -- meant to lay out the White House's own evidence that Assad's government used chemical weapons.

The White House has claimed to have obtained intercepted phone calls that provide further evidence against the Assad regime, and administration officials also told CBS News that intelligence agencies detected activity at known Syrian chemical weapons sites the week before the Ghouta attack.

Similar activity had been detected before, and the assumption was made that the Syrians were moving things around for security reasons. But last week, the officials told CBS News the most recent activity was being viewed as possible preparation for Wednesday's attack.

With the possible exception of the intercepted phone calls, and the claim by Cameron on Thursday that regime soldiers had taken precautions typical of chemical weapons use, the vast majority of the evidence of Assad regime culpability presented by both Cameron, the Obama administration and their allies in France, Turkey and other nations, is circumstantial in nature.

It hinges largely on the argument, as Cameron put it Thursday, that there are simply "no plausible alternate scenarios."

Below is a look at some of the often-reiterated circumstantial evidence presented by the U.S. and U.K. governments, along with questions which remain unanswered pertaining to that evidence and which skeptics of the legal basis for a military intervention in both countries' legislatures will likely be seeking answers to in the coming days.

"There is no credible evidence that any opposition group has used CW (chemical weapons). A number continue to seek a CW capability, but none currently has the capability to conduct a CW attack on this scale."

That quote comes from the British JTI report published Thursday, but it echoes the most often-used argument to pin blame for the Ghouta attacks on Assad's government.

Chemical and biological weapons experts have been relatively consistent in their analysis, saying only a military force with access to and knowledge of missile delivery systems and the sarin gas suspected in Ghouta could have carried out an attack capable of killing hundreds of people.

But no official death toll has been given. The international aid group Doctors Without Borders said it tallied 355 people killed and more than 3,000 displaying symptoms typical of a nerve agent like sarin gas, but no independent organization has yet confirmed that it was sarin gas used in Ghouta. Nor has it been confirmed what the delivery method was.

The international community will hope for clarity on these questions from the U.N. inspectors who have been on the ground in Ghouta this week.

There are other chemical agents which have allegedly been used in Syria since 2012, including far-less-potent organophosphates, which are readily available in the form of industrial insecticides.

It should also be noted that Russia claimed to have provided evidence in July to the U.N. which showed the rebels were behind a sarin gas attack in the village of Khan al-Assal in March 2012.

"It was established that on March 19, the rebels launched an unguided Bashar 3 projectile towards Khan al-Assal controlled by the government forces," Vitaly Churkin, Russian ambassador to the United Nations, told reporters, adding that he intended to share the evidence with the U.S., U.K and France.

The ambassador said the results of the analysis of the gas-laden projectile indicated the Bashar 3 rocket "was not industrially manufactured and was filled with sarin." He said the samples indicated the sarin and the projectile were produced in "cottage industry" conditions.

The absence of chemical stabilizers, which are needed for long-term storage and later use, indicated its "possibly recent production," Churkin said.

Assad has done it before

"We have assessed previously that the Syrian regime used lethal CW on 14 occasions from 2012 ... A clear pattern of regime use has therefore been established," declared the JTI report in Britain on Thursday.

U.S. intelligence concluded "with some degree of varying confidence" that the Syrian government had twice used chemical weapons, the White House and other top administration officials said on April 25.

However, the officials also said more definitive proof was needed and the U.S. was not ready to escalate its involvement in Syria. The White House disclosed the intelligence in letters to two senators.

"Our intelligence community does assess, with varying degrees of confidence, that the Syrian regime has used chemical weapons on a small scale in Syria, specifically, the chemical agent sarin," the White House said in its letter, which was signed by Obama's legislative director, Miguel Rodriguez.

No tangible evidence has been offered by either the U.S. or Britain to demonstrate what lead to the conclusion that Assad's forces must have been behind the previous suspected chemical attacks, and the U.N. inspection team -- which had its original plans derailed by the unexpected attacks in Ghouta -- has not reached any other sites. Much like the Ghouta attacks, the intelligence behind the accusations that Assad's regime was involved in previous chemical weapons incidents has remained secret.

Less than five days after the attack in Ghouta, an Obama administration official told CBS News that the Assad regime had essentially blocked a team of United Nations inspectors already in Damascus access to the Ghouta site -- a delay the White House said would make any eventual granting of permission "too late to be credible."

"At this juncture, any belated decision by the regime to grant access to the UN team would be considered too late to be credible, including because the evidence available has been significantly corrupted as a result of the regime's persistent shelling and other intentional actions over the last five days," the official said.

Officials argued that the suspected weapon in question, sarin gas, degrades too quickly and would have been dispersed by the continued shelling in Ghouta to provide useful evidence.

The JTI report issued by the U.K. on Thursday, however, refutes that claim: "There is no immediate time limit over which environmental or physiological samples would have degraded beyond usefulness. However, the longer it takes inspectors to gain access to the affected sites, the more difficult it will be to establish the chain of evidence beyond a reasonable doubt."

Also clashing with the "too late to be credible" claim is the fact that the 20 scientists in Syria to investigate claims of chemical weapons use for the United Nations were only originally sent to inspect incidents which date back as far as March. Those alleged attacks were much smaller in scale, and the remnants of any CW used have had five months to degrade, but the weapons experts still wanted to go and collect samples.

There is also the fundamental claim that Assad's government delayed the inspectors' visit to Ghouta. They have now visited the suburbs on three separate days, and on Tuesday, Syrian Foreign Minister Walid Muallem countered the accusations of a deliberate delay, saying his government only received the request from U.N. disarmament chief Angela Kane to visit the area on Saturday.

"Miss Kane came on Saturday, on Sunday we agreed and on Monday, they (the U.N. inspectors) went to Moadamiyeh (a town in Ghouta). We did not argue about the sites they wanted to visit. We agreed straight away," said Muallem. "How could we be accused of causing a delay?"

"They're killing us": Migrants trapped on tiny island beg for help
Tucker Reals