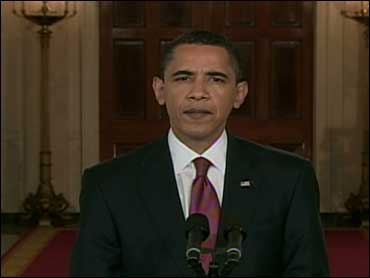 (CBS)
Following recent violence in the Middle East, peace between Israel and the Palestinians is "not easier than it was, but I think it's just as necessary," President Obama said at his news conference Tuesday evening.

"We don't yet know what the Israeli government is going to look like, and we don't yet know what the future shape of Palestinian leadership is going to be comprised of," the president said. "What we do know is this: that the status quo is unsustainable, that it is critical for us to advance a two-state solution where Israelis and Palestinians can live side by side in their own states with peace and security."

He said that by assigning George Mitchell as the special envoy to the region the White House has "signaled" they are "serious" about enforcing the peace.

President Obama compared the conflict to one now largely resolved between Catholics and Protestants in Northern Ireland.

"How effective these negotiations may be, I think we're going to have to wait and see. But, you know, we -- we were here for St. Patrick's Day, and you'll recall that we had what had been previously sworn enemies celebrating here in this very room," he explained.

"If you are persistent, then -- then these problems can be dealt with," Obama said, closing his press conference on a positive note.

"That whole philosophy of persistence, by the way, is one that I'm going to be emphasizing again and again in the months and years to come as long as I'm in this office. I'm a big believer in persistence," he said, tying together his plans for the economy, his budget, Iran, lobbyists and the Middle East.